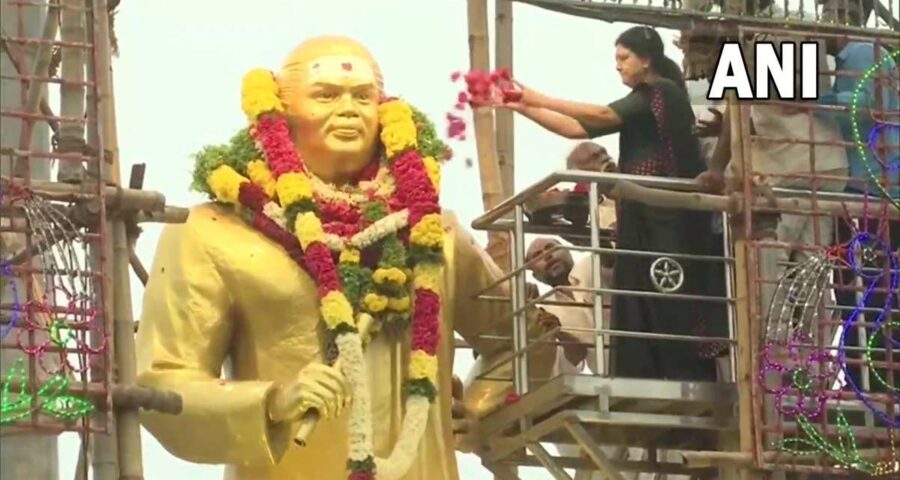 The visit is considered significant as Sasikala enjoys sizeable support from the Thevar community. If the party heads for a vertical split, it is believed that the 'caste card' might prove useful Expelled AIADMK leader VK Sasikala on Friday paid tribute to freedom fighter Muthuramalinga Thevar before a statue of the leader at Goripalayam Junction in Madurai ahead of the 114th Thevar Jayanti and the 59th guru puja celebrations to be observed on Saturday. She also paid homage to the Maruthu Brothers, who were also freedom fighters, at Teppakulam before heading to Pasumpon.

Sasikala reached the venue in a van that had been exclusively used by former chief minister and AIADMK supremo J Jayalalithaa during her campaigns. She garlanded the life-size bronze statue of Thevar early in the morning with her supporters alongside. The visit is considered significant as Sasikala enjoys sizeable support from the Thevar community. If the party heads for a vertical split in future, it is believed that the ‘caste card’ might prove useful.

The government had denied public entry to the event owing to Covid restrictions, but hundreds of cadres gathered around Sasikala and raised slogans in support of her.

Eyeing a political comeback, Sasikala is on a grand tour of south Tamil Nadu to interact with cadres and has been sending out messages that she is looking to stake a claim in the party and setting it in order. Earlier this month, as part of the golden jubilee celebrations of the founding of AIADMK, she unveiled a plaque that addressed her as the party’s general secretary.

This led the AIADMK high command to issue a statement condemning the move. Senior party leader D Jayakumar even filed a police complaint seeking action against her for claiming to be a member and leader of the AIADMK.

A couple of days ago, AIADMK coordinator O Panneerselvam said during a media interaction that the party high command will decide on Sasikala’s re-entry and that anyone can come to politics but it is up to the people to accept them. This created unrest among the cadres as the party’s co-coordinator and Leader of Opposition Edappadi K Palaniswami and a couple of other leaders had just a day earlier ruled out any plans to take Sasikala back into the party fold.