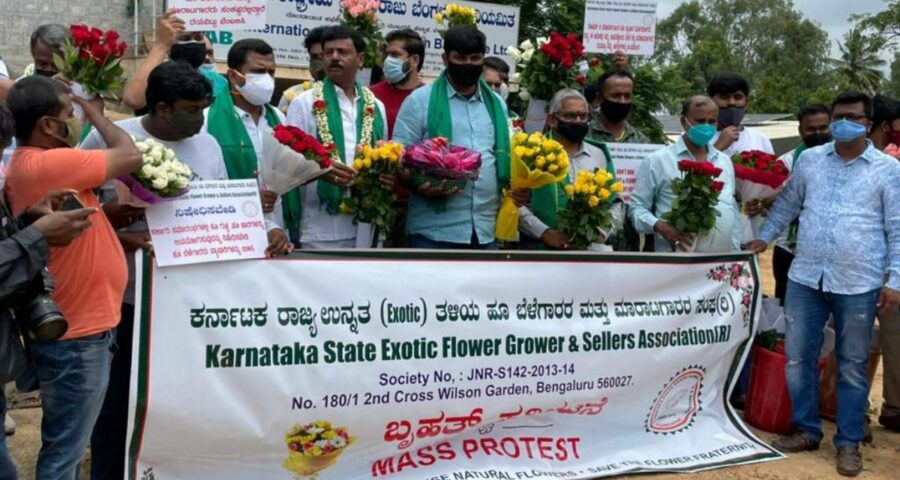 Days after the Karnataka government issued an order banning garlands, bouquets and fruits at official programmes across the state, the South India Floriculture Association (SIFA) and various farmers organisations demanded the government to revoke the order and held a protest in Bengaluru Thursday.

Following the directions of newly-appointed Karnataka Chief Minister Basavaraj Bommai, the state chief secretary Tuesday issued an order which bans flowers, garlands, bouquets, fruits and shawls at government events and states that only Kannada books will be given in the events.

SIFA Thursday held a protest against the order outside the international flower auction centre at Hebbal in North Bengaluru.

Speaking to The Indian Express, T M Aravind, president of SIFA, said, “The flower growers and florists are already badly hit by the ongoing Covid-19 pandemic. Amid such a time, the government should offer us support and help us market the flowers but is rather issuing orders will create unnecessary losses to flower growers and vendors.” Karnataka has around 7,500 hectare of poly houses growing different varieties of flowers, according to SIFA. “Many families are dependent on growing flowers and the government is also supporting us by giving subsidies to set up polyhouses. Many youngsters have started polyhouses and are growing flowers but after the pandemic, the growers are suffering since there is no demand for flowers in the international market and also in the country since there are no events like marriages and functions taking place,” Aravind said.

He complained there is no scientific logic behind the order issued by the government. “Banning plastics to prepare flower bouquets is fine but banning flowers in government events is not a logical solution for anything. In fact, flower vendors are using eco-friendly ways to prepare bouquets. Crores of rupees are invested in floriculture. Many are carrying out farming by taking loans, what will they do now?” he questioned.

SIFA and other farmers associations submitted a letter to the Chief Secretary of the state, asking him to withdraw the order immediately. Speaking to The Indian Express, Srikanth Bollapalli, president of the Flower Council of India, said, “We have sent a letter to Chief Secretary P Ravi Kumar who issued the circular banning flowers at government events. Before taking such decisions, government officials should think about the farmers who are growing flowers and the people who are dependent on the flower business. We urge the government to revoke the order immediately.”

Bollapalli said Bengaluru and surrounding districts are a major hub of India’s flower industry. “Bengaluru urban and rural districts have many greenhouses growing flowers and exporting them abroad and within the country. But for the last one year, the industry has suffered major lossed due to the lockdown and pandemic,” he added.

“While exports remain subdued due to restrictions on international cargoes, domestic sales have also not increased since the onset of the second wave of Covid-19 and restrictions induced by the pandemic. Flowers grown in Bengaluru rural, Chikkaballapur and other surrounding districts were in high demand in India as well as abroad, especially before the pandemic hit us. They used to be exported to Europe, West Asia, South East Asia and the US through International Flower Auction Bangalore (IFAB), a company that auctions cut-flowers of various crops from five districts,” Bollapalli explained.

Prakash Gowda, a floriculturist from Bengaluru rural, said many flower growers have abandoned farming and have started using their polyhouses to grow vegetables to make ends meet. “If the government puts this kind of an inappropriate ban on flowers at the events, all farmers have to lose hope on growing flowers,” he said.