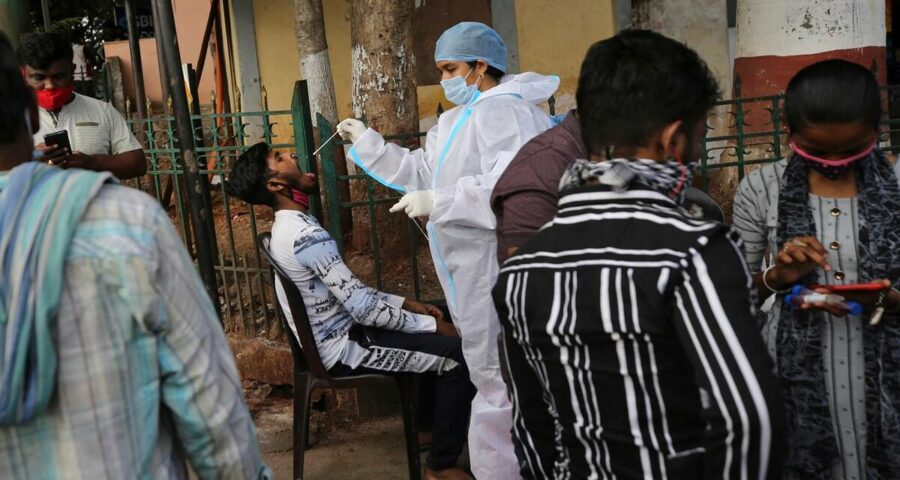 Karnataka Bangalore Latest News Live Updates: Initially, around 108 teams will be despatched. Gradually, the door-to-door visits by doctors would be extended to all the 29 lakh houses in Bengaluru. To start with, two wards would be selected in each Assembly segment, he said. A team of doctors, paramedics and ASHA (accredited social health activist) workers would visit every house and screen the households. For this, an app has been developed wherein the patients would be screened for any symptoms and co-morbidities. The data would be uploaded on the app, the Minister’s office said in a press statement.

The doctors would collect details whether the residents were vaccinated, the statement said. In case of any symptomatic patients, on-the-spot tests would be conducted and medical kits provided, it said. “We have also decided that a team of doctors will reach a household within six hours of a patient testing positive. We will provide medical kits also and they will have the names and phone numbers of the doctors,” the statement said. The patients, quarantined at home, can contact the doctors any time and this would help the doctors monitor the infected, it said. (PTI)

Catch the latest news in Bengaluru and Karnataka as we bring you live updates on the political developments, Covid-19, weather and more in the state. Follow for the latest updates. Also read Tamil Nadu Chennai news

Poojary stressed that such instances were noted to be high in Dakshina Kannada and Udupi districts. He added that cases against activists of other organisaions that were similarly placed were withdrawn by previous governments. “However, cases filed against Hindutva activists were not withdrawn,” he alleged.

The Centre has promised to increase Karnataka’s allocation of COVID-19 vaccine doses from around 65 lakh to 1 crore per month, Chief Minister Basavaraj Bommai said on Monday.

After holding a COVID-19 review meeting in Mysuru Chief Minister Basavaraj Bommai said Karnataka is currently receiving an average of 65 lakh doses every month. When he met the Union Health Minister during his visit to Delhi and sought an increase in the allocation, he was assured that Karnataka will be receiving one crore doses from August.

Bommai also urged the Centre to raise the allocation to 1.5 crore doses from September, which will facilitate administration of 5 lakh doses every day across the state.

The district administration of Dharwad has announced that public celebrations of the Ganesha festival will not be allowed in the wake of a possible third wave of Covid-19 being predicted.

According to Deputy Commissioner Nitesh Patil, the decision was taken much in advance as preparations for installation of Ganesh pandals begin early in teh district, particularly in the twin cities of Hubballi-Dharwad where such pandals draw a large number of visitors. “Even though the festival is celebrated only in September, the decision was taken as a precautionary measure. Those bursting fire crackers during the festival should ensure that they use only green fire crackers authorised by the CSIR (Council of Scientific & Industrial Research) and NEERI (National Environmental Engineering Research Institute),” he explained.

The district administration had banned public celebrations of the festival last year as well, citing restrictions in place due to the pandemic.

To detect COVID-19 cases, the city civic body – Bruhat Bengaluru Mahanagara Palike (BBMP) – would launch a programme involving doctors making door-to-door visits, Karnataka Revenue Minister R Ashoka said on Monday. The Minister, who held a meeting with officials of the civic body to assess the COVID-19 situation, said the programme would be launched on August 16.

“This time we are going for a proactive approach, even before the peak in the number of cases again,” he said. He added that two wards would be selected in each Assembly segment. “A team of doctors, paramedics and ASHA (accredited social health activist) workers would visit every house and screen the households. For this, an app has been developed wherein the patients would be screened for any symptoms and co-morbidities,” a statement from his office added.

As per the plan, doctors would collect details whether the residents were vaccinated, the statement said. In case of any symptomatic patients, on-the-spot tests would be conducted and medical kits provided. “We have also decided that a team of doctors will reach a household within six hours of a patient testing positive,” the statement added.

Out of 1,186 new cases reported today, 296 were from Bengaluru Urban which saw 410 getting discharged and one dying of the infection.

With Karnataka all set to resume offline classes for school students from August 23, the Primary and Secondary Education Department has claimed that Covid-19 vaccination drives for teachers were continued to be held on a priority basis, as decided by the government.

According to S R Umashankar, Principal Secretary of the department, 84 per cent of the teachers had taken one dose already, while 19 per cent were administered with both doses so far.

Meanwhile, officials in the department added that the Health Department had directed them forward lists of staff yet to be vaccinated at schools to them. “This will include information of unvaccinated teachers, non-teaching staff, and even parents of students in Classes9 and 10. Based on this list, they will be vaccinated on priority,” the official added.

Offline classes in the state are scheduled to resume next Monday for students in classes 9, 10, and pre-university colleges (equivalent to Classes 11 and 12).

Owing to the Covid-19 pandemic situation, Bengaluru is likely to keep Independence Day celebrations a low-key affair this year as well. According to Bruhat Bengaluru Mahanagara Palike (BBMP) Chief Commissioner Gaurav Gupta, a decision on the same was taken at a meeting held with officials of the departments of health, police and the civic body on Monday.

“While the flag-hoisting ceremony and ceremonial parade will take place, no cultural programmes will be hosted. No audience will be allowed at the event as well. A final list of all protocols to be followed on August 15 will be issued soon,” he said.

Gupta added that officials were working in tandem with officials of various departments based on suggestions made by technical advisory committees and experts to handle the pandemic efficiently.

Good morning Bengaluru!
Welcome to the live blog from Bengaluru where we bring to you the latest updates on Basavaraj Bommai, Karnataka politics, Covid-19, BBMP and more across Bengaluru and Karnataka. Follow the blog to stay up to date with the state in real time.

The Karnataka Secondary Education Examination Board (KSEEB) Monday declared the SSLC or Class X results with a record pass percentage of 99.99 per cent. A total of 8,71,443 students had appeared for the examination which was conducted following strict Covid protocol. With a pass percentage of 100, boys have fared slightly better than the girls at 99.99 per cent. The results were announced by the newly appointed Primary and Secondary Education Minister B C Nagesh.