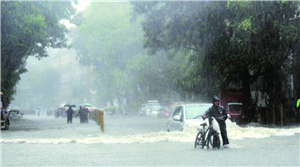 While the topography of the two areas has been blamed for rainwater accumulation over the years, last year, the BMC undertook an ambitious project to construct two underground water tanks at Pramod Mahajan Park in Dadar West and St Xavier Ground in Parel to provide a catchment where the floodwater from Hindmata could be stored during heavy rainfall. Intense waterlogging, at times water level reaching three to four feet high, during monsoon is nothing new to Hindmata junction, a saucer-shaped, low-lying area between Dadar TT and Parel, the Gandhi Market in Sion, just three kilometres away. On Wednesday, the two areas were once again under 2.5-foot water as the season’s first heavy rainfall lashed the city.

While the topography of the two areas has been blamed for rainwater accumulation over the years, last year, the BMC undertook an ambitious project to construct two underground water tanks at Pramod Mahajan Park in Dadar West and St Xavier Ground in Parel to provide a catchment where the floodwater from Hindmata could be stored during heavy rainfall.

“Just eight days back, we have received permission to lay the underground water pipelines below Tata Mills (at Parel) which will carry floodwater from Hindmata to the two underground tanks, located 1-1.5 km away. It will take another 30 days to complete the work, after which the flooding woes of the area will be resolved,” IS Chahal, the municipal commissioner, said. The two tanks can store 1 lakh cubic metre water when completed.

A similar, extensive and dedicated flood-mitigation measure for Gandhi Market is also under construction. According to BMC officials, in the first phase of the project, chambers and culverts for a water tank under Gandhi Market are being constructed. A 900-mm capacity stormwater drain line has already been laid to carry the rainwater up to the Bharat Nagar railway nullah near King’s Circle. In the second phase, floodgates will be built at the nullah to ensure that the high tide water does not enter during heavy rain. From the underground tanks, the water will be carried, through drains, to the Bharat Nagar drain, which will then take it to the sea.

“Work is ongoing at the site and it should take only 10 days for completion,” Chahal said Wednesday.

Previously, high-capacity dewatering pumps were placed at Gandhi Market to drain out excess rainwater. While the water would earlier recede in three to four hours, during the last monsoon, and on Wednesday as well, it took almost eight hours for the water to ebb.

“For the first time, after so many years of continuous inundation, the Hindmata flyover did not stop for vehicular traffic, as the MCGM has constructed a new connecting ramp between both the flyovers raising the height by 1.2 metres,” P Velrasu, the additional municipal commissioner, said.

The BMC on Wednesday blamed the high-intensity rain coinciding with the high tide for rainwater taking longer to recede from many low-lying areas in the city.

“As the rainfall intensity in many locations exceeded 60 mm per hour, which is much higher than the planned capacities of the drains (of 25-30mm per hour), many places witnessed waterlogging and water stagnation. The nullas and the drainage systems were also fully packed and the drainage was slow because of the high tide situation,” a civic official said.

The BJP, meanwhile, slammed BMC for making tall claims about cleaning drains and nullahs. BJP MLA from Bandra West Ashish Shelar said, “In the first rain itself, Mumbai has flooded. Every year, Rs 70 to 100 crore is spent on cleaning the drains, apart from money spent on stormwater drainage repairing and other works.”