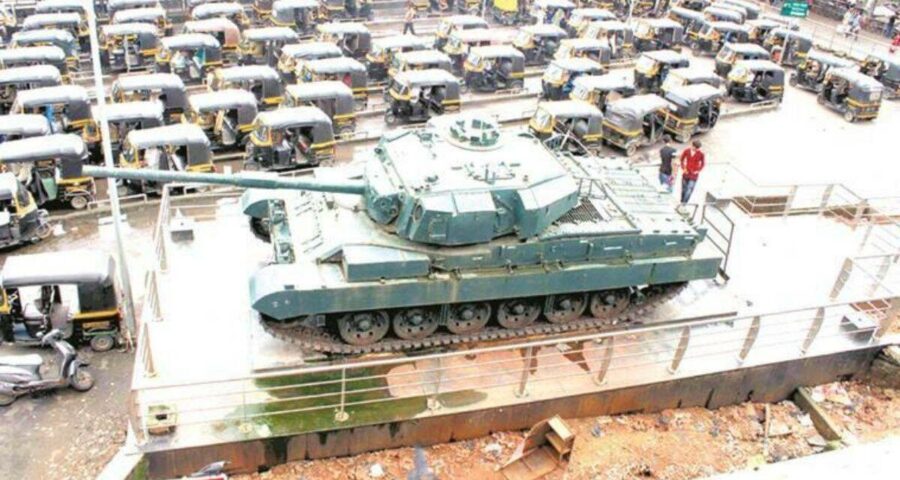 While the locals claim that the tank is lying in a neglected state, with vegetation growing all over it, the civic body officials said the structure is under their watch and that they are making efforts towards its maintenance. An Indian military battle tank, which was installed outside the Mumbra Railway Station in Thane in 2013 as a war memorial, has been gathering dust on the roadside at Reti Bundar for the past two years with the Thane Municipal Corporation (TMC) failing to complete its restoration and repair work on time.

While the tank, which was deployed in the 1971 war against Pakistan, is lying in a neglected state with vegetation growing all over it, civic body officials said the structure is under their watch and that they are making efforts towards its maintenance.

The battle tank was installed by the TMC and Nationalist Congress Party (NCP) MLA Jitendra Awhad, who is now a cabinet minister for housing, outside Mumbra Railway Station in 2013.

According to the engraving on the raised platform where the tank was placed, former President Pratibha Patil had dedicated the tank to Major Manish Pitambre, a resident of Thane, who was martyred in 2006 during counter-insurgency operations in Jammu and Kashmir.

Following its installation at the station, the tank used to attract several tourists who would click pictures with it. However, after a few years, it had become a forgotten landmark “frequented mostly by drug addicts, beggars, and squatters”, sources said.

According to TMC officials, since the tank was being used by anti-social elements and was also in need of maintenance and restoration work, it was moved from Mumbra to the road in Reti Bundar in 2019. However, due to several reasons, including the Covid-19 pandemic, the work could never start and the tank has remained at Reti Bundar creek in an abandoned state. It is now covered by the vegetation that has grown all around and over it.

Even as residents in the area claim that the tank is standing in a neglected and miserable condition, TMC officials said that it had to be moved from the station area to its current spot for maintenance work such as colouring.

“At least two cranes are required to carry out the maintenance work of the tank. Doing this kind of work with such heavy machinery would not have been possible at the station area and hence, the tank was shifted to Reti Bundar. It is not that it has been abandoned, we have only kept it there for work, which somehow got delayed,” said a TMC official, requesting anonymity.

Sagar Salunke, Assistant Municipal Commissioner of Mumbra, said the civic body would soon start work on the tank. On Wednesday, officials covered the tank with a tarpaulin sheet, and soon, Salunke said, they will also erect a shed at the spot.

“We are in touch with a few contractors who are experienced in the maintenance of such tanks and soon the painting work will start on it. We are planning to restore and then install the tank properly as a war memorial. We are contemplating what all could be done for the preservation of the tank — like having transparent glass around it, railings, and other beautification work. Once the location is decided, work will start on the tank. Till then, we have covered it with the sheet,” said Salunke.

Minister Awhad said, “The tank was shifted to Reti Bundar for security reasons and for maintenance, work on which will begin soon. We are searching for the right place to install it in a better way — the place could be Chowpatty as from there it could be visible to all the people who would visit the spot.”