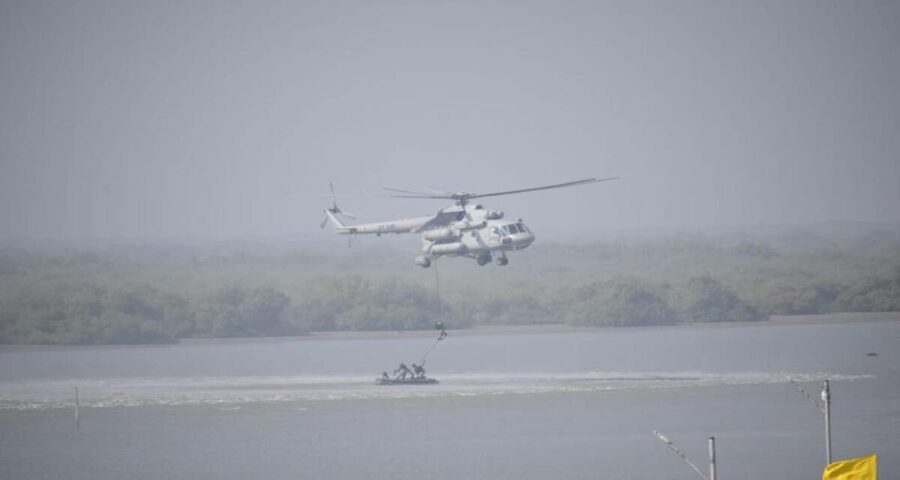 The exercise was part of ‘Dakshin Shakti’, being held in the training areas of Rajasthan and Gujarat with a focus on network-centric warfare, which denotes effective use of information technology and computer networking tools to form networks of various force elements in play on the battlefield. This exercise aims to validate the battle readiness and operational effectiveness of troops of the Southern Army in an integrated and futuristic battlefield scenario.

“Sagar Shakti involved the insertion of troops and manoeuvres by forces in all three dimensions simultaneously in an integrated manner. Comprehensive coordination incorporating contemporary technology to include response mechanisms in a multi-domain environment, real-time communication, and sharing of operational data to overcome emerging multi-dimensional threats were practised and honed amongst the participants.” said a press statement from the Southern Command.

Sagar Shakti, denoting maritime power, was witnessed by the senior hierarchy of participating agencies. “This is the first time that an effective punch of a Field Training Exercise has been packed in the response mechanism which functions under a robust Central Operation Room (COR) comprising troops of multiple forces. The integration and coordination achieved was apparent and applauded by senior officials.” said the press statement.

Dakshin Shakti is primarily aimed at stress-testing new concepts of warfighting in all domains, including space, cyber, electronic and information warfare, along with the conventional tactics of the air and surface-based assets of the armed forces.

A key focus of the exercise is on the exploitation of new and indigenous technologies like advanced light helicopter (weapon system integrated) Dhruv, swarm drones and enmeshing of artificial intelligence to provide a cohesive intelligence, surveillance and recce architecture, Southern Command authorities said.