With nearly 20,000 cases being recorded over the last three days in Bengaluru, Karnataka is now reviving efforts to create more modular ICU facilities across the city to ramp up the number of ICU ventilator beds in public sector hospitals from 117 to over 250. 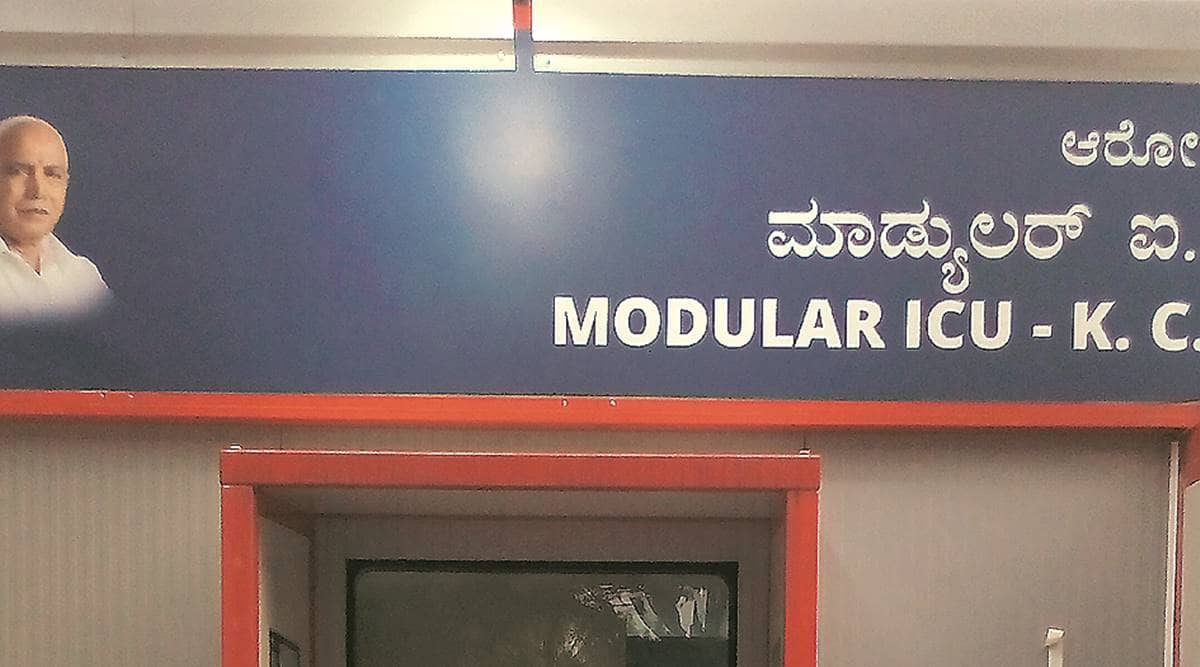 Around 5 pm every day, relatives of seriously ill Covid patients at a makeshift 45-bed ICU at the government-run K C General Hospital in north Bengaluru are allowed to gather around a CCTV screen placed on a large glass window to catch a glimpse of their loved ones inside. At the same time, a camera outside the window relays images of the relatives into the ICU.

On Thursday, a wave of recognition from an elderly woman inside brought a trickle of tears on the face of a young man waiting at the window.

“We were at a private hospital and were paying Rs 60,000 per day. We got this ICU facility allotted three days ago. Here, unlike most other hospitals, we are allowed to see our patient on a daily basis, and this is a relief for the family,” says Bala K, whose 32-year-old brother-in-law is undergoing treatment inside.

The modular facility was created using 10 cargo containers and operationalised in February this year — ahead of the second wave.

Amid a crisis where ICUs and ICU ventilator beds are out of the reach of even top officials, this facility has emerged as one of the most sought-after in the government sector with as many as 25 ventilators provided under PM-CARES in the first wave.

“The ICU facility is almost full with patients. There are a few beds available but we need to keep them blocked for our own patients in other Covid wards in the event of their condition deteriorating,” says a duty doctor.

Other government hospitals in Bengaluru did not fully utilise the large numbers of ventilators supplied to them last year through PM-CARES after Covid cases began falling in November 2020. This resulted in a massive ICU and ICU ventilator bed crunch in Bengaluru from the second week of April onward, when an average of over 15,000 cases and an all-time high of over 1,000 deaths occurred in just two weeks.

With nearly 20,000 cases being recorded over the last three days in Bengaluru, Karnataka is now reviving efforts to create more modular ICU facilities across the city to ramp up the number of ICU ventilator beds in public sector hospitals from 117 to over 250.

At K C General Hospital, the modular ICU, which was created under a public-private initiative, can be shifted to any other location to meet any change in the demand pattern. Each container is a room with nine of them having five ICU beds each.

And yet, what really sets this facility apart are the CCTV cameras in each container that allow remote monitoring of patients and interaction with relatives.

On Thursday evening, a nurse went around announcing the number of the ICU room that will be shown next on the CCTV screen and the names of patients so that family members gathered in the yard outside can take turns to have a look.

Almost everyone who approaches the windows takes a picture or a video and sends them to friends and family. When the visitors are done, two doctors come to the waiting area to provide updates—some relatives are told to try and source key medicines.

“Your patient is still on the ventilator and that means the condition is still serious. We are hoping he will pull through,” one family is told by a doctor. There is better news for another family. “There is improvement. She is able to breathe better now. We may move her out of the ICU,” says the doctor.