Dharnas against the farm laws were initially gatherings that largely comprised of men and women above 50 years of age. 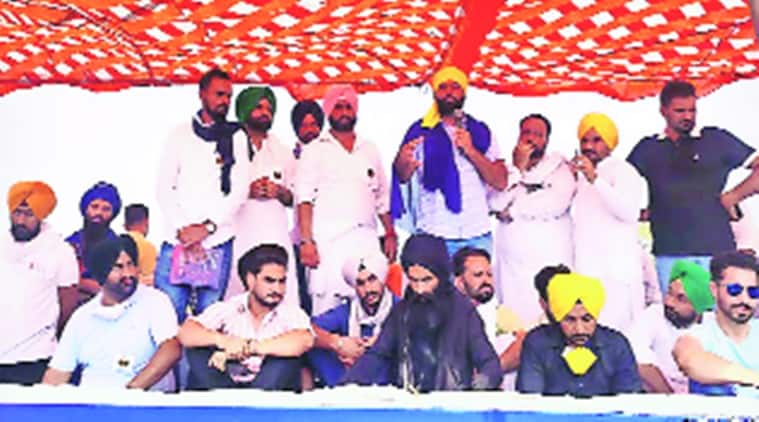 A MAJOR shot in the arm for the farmers’ movement was the support of the Punjabi music industry, which not only took a strong stand on the farm laws but also put its weight behind the agitation, slowly leading to change in the face of the protest — from primarily the elderly farmers to that of the youth.

Dharnas against the farm laws were initially gatherings that largely comprised of men and women above 50 years of age.

Soon after, Punjabi artistes came up with songs on the farmers and their efforts leading to more and more young people joining the ongoing agitation at the Delhi borders and elsewhere.

How it all began
In July 2020, when the agitation was still in its early days, many farm activists on social media questioned the absence of Punjabi artistes from the then building up anti-farm bill movement. The artistes were criticised for “making money singing songs glorifying Jatts”, but not speaking up for farmers.

The Punjabi entertainment industry, however, was quick to respond.

As singers got ready to play their part, farmer unions were in two minds on allowing them on stage.
Punjabi singer Sidhu Moosewala sought permission from a union to attend their protest, but was denied on the ground that his presence could create a distraction. Another group of Punjabi singers, led by Harbhajan Mann, went to attend a protest at Nabha where they were not welcomed warmly.
This forced the artistes to set their own stage.

Moosewala organised a huge gathering in Mansa on September 25, 2020, the day the call for Punjab Bandh was made. Another group of artistes organised a massive gathering at Batala in the last week of September to support the protest. Moosewala also led a protest march to Chandigarh on September 27.
Punjab Kisan Union president Ruldu Singh had released a video criticising such gatherings, which, incidentally, were more alive and loud than those by mainstream farmer unions.
Response to singers forced farmer unions to revise their approach.

Farmer unions have maintained that the movement was sustained due to their efforts and planning. However, Bhartiya Kisan Union Etka Dakunda general secretary Jagmohan Singh admitted that singers did play a role in bringing youth to protest sites. “There were many factors behind involvement of youth in protest. Singers played a comparative role. They (singers) come to participate on their own. We never invited them,” said Jagmohan Singh.

He said, “At the end of the day, people have moderated the narrative. We saw how crowd didn’t allow Maan to speak from the stage…So there was also pressure from the people on singers to support this agitation.”

Singer Harf Cheema agrees, “Both theories are true. On one side singers motivated youth and on other there was also pressure of society on singers to support the agitation and play their role. What affects society also affects singers.”

Some of the songs inspired by the movement against farm laws include ‘Kisan Anthem’ performed by 10 singers and has 48 million views on YouTube; ‘Pecha Pe Geya Centre Nal’ by Kanwar Garewal; Punjab Bolda, Dhrana, Assi Wandange, and Zalam Sarkaran.

Most of the songs attacked the Union government with Delhi as its symbol. These songs were played on tractors as they moved from villages in Punjab to the Delhi border.

Though Diljit Dosanjh didn’t produce any specific song on the farm movement, he was very active on Twitter and also supported the agitation with monetary donations.

The frequency of new songs on the farm movement decreased after the January 26 incident in Delhi.
“Most of the singers were free when the agitation begain as there was lockdown. They released songs and made money. Now when everything is opening and singers have resumed their shows, very few songs on farm laws are being produced,” said a farmer union leader.

Harf Cheema disagrees. “It is easy to blame singers because they are celebrities. When everyone was focused on farm bills, singers were also there. If intensity would go down then it would also reflect on what singers do. But I am sure that the farm agitation is going to intensify in November, as it had last November,” he said.