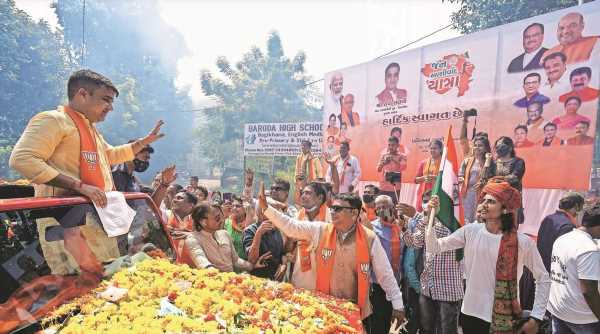 Sanghavi, who flagged off a cycle rally organised by the Vadodara city police as part of the Azadi Amrutmahotsav and Fit India movement, later also participated in the Jan Ashirwaad Yatra of the BJP that passed through the city. Gujarat Minister of State for Home and Police Housing, Harsh Sanghavi, urged BJP workers “to remember that people see Narendrabai (PM Modi)” in them while conducting in public. The minister also reminded that the government permitted garba in private groups during Navratri so that people could “enjoy” after having suffering “mental distress” during the pandemic.

Sanghavi, who flagged off a cycle rally organised by the Vadodara city police as part of the Azadi Amrutmahotsav and Fit India movement, later also participated in the Jan Ashirwaad Yatra of the BJP that passed through the city.

Flanked by MP Ranjan Bhatt, Mayor Keyur Rokadia and other Vadodara BJP leaders, Sanghavi said, “We must join hands and pay respect to Narendrabhai (Modi), who has spent 20 years in office. He first made Gujarat proud and now, he has made India proud. The opposition has not been able to point even a finger at him, it is a matter of pride for us,” he said.

He further reminded that it is only because of Modi that the people have been electing the party to power. “BJP workers should always remember that when we go among people, they see Narendra Modi in us. It is only because of him that people have entrusted the power in us and given us the opportunity to serve them, we must not forget this. BJP workers can call me directly at any time of the day or night because I will always remain a BJP worker,” he said.

Sanghavi said he has already executed the first task handed out to him by Chief Minister Bhupendra Patel after taking oath as Minister of State. “As soon as I took the oath, on the first day as MoS, CM Bhupendra Patel gave me the first instruction that the appointment of youth (Lok Rakshak Dal), which have been kept on hold due to Covid-19 outbreak should be immediately cleared. I called a meeting on Sunday to do the needful immediately… So, the home department has declared 27,847 vacancies (in the Lok Rakshak Dal), which will be completed in the days to come,” Sanghavi said.