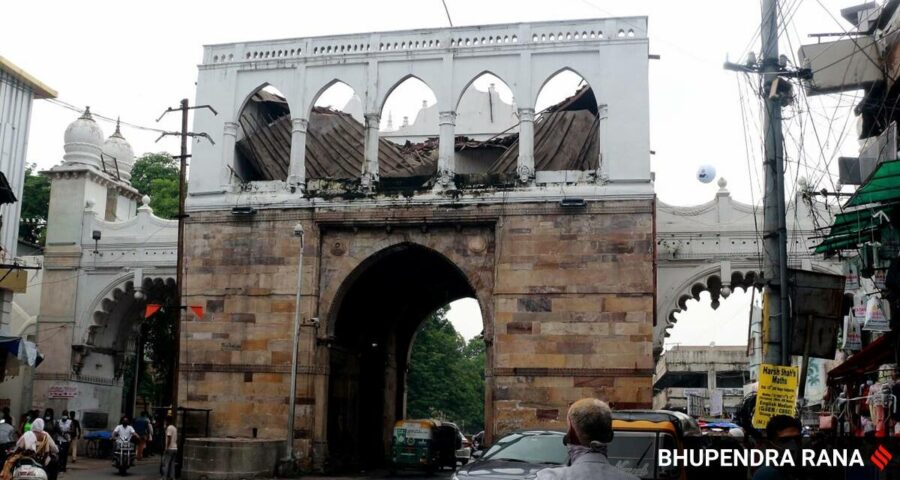 Lehripura is among the four gates, including Champaner, Gendigate and Panigate, that served as entry points to the erstwhile old city of Vadodara with Mandvi gate being at the centre of the city. A slab of the pre-Mughal era Lehripura gate in the old city of Vadodara that was restored by the Vadodara Municipal Corporation (VMC) along with the Archaeological Survey of India (ASI) in 2014 collapsed on Monday. The VMC and the ASI, however, refused to attribute any reason for the collapse. Deputy Municipal Commissioner Alpesh Majumdar, who is also the incharge Additional City Engineer for Building Project department, told The Indian Express that the VMC had written to the ASI, intimating them about the collapse of the slab.

In 2013, parts of the gate collapsed but the main facade remained intact. On Monday, the main slab of the gate’s upper roof collapsed, leading to momentary panic in the busy market area where it is located and also serves as a passage to vehicles.

Majumdar said, “The restoration work of the gate was done by the ASI in 2014 and we have informed them about the collapse today.” The VMC, in 2014, had sought help from the ASI as it did not have expertise in the restoration of historical structures. Although the gate was not on the list of ASI-protected monuments, the ASI stepped in and replaced the damaged stones from arches, refurbished the lime concrete and did chemical treatment as well as reconstructing the support pillars and walls.

Archana Kaul, incharge conservator of ASI, Vadodara, said, “The VMC has just sent us an intimation and we are visiting the site tomorrow to check what happened. Since the officials who handled the reconstruction have been transferred, we will have to take a deep look and need the VMC to share more details to see what can be done to protect the structure.”

The VMC records do not mention when the gate was constructed but it is known to exist since the pre-Mughal period, ahead of the Babi dynasty rule in Vadodara.

Lehripura is among the four gates, including Champaner, Gendigate and Panigate, that served as entry points to the erstwhile old city of Vadodara with Mandvi gate being at the centre of the city.

In 2008-’09, the VMC had allocated a budget of Rs 45 lakh for the restoration and the project was completed at a cost of around Rs 75 lakh.