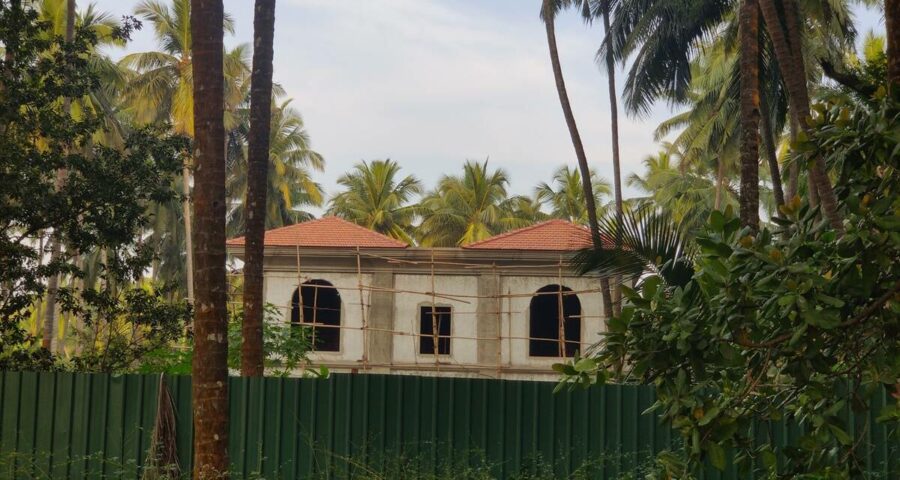 Goa Deputy Chief Minister Chandrakant Kavlekar has said he has ordered the withdrawal of permission for a bungalow’s construction in a heritage Old Goa precinct, attributing the earlier move to a “mistake”.

The construction had triggered controversy and protests by residents and activists, some of whom went on a fast from Wednesday.

Kavlekar, who also holds the Town and Country Planning portfolio, told reporters in Margao on Thursday: “This has not happened in my term. It happened much earlier. I have immediately ordered an inquiry and given instructions to take back this mistake made by someone.”

Thousands had gathered outside the St Cajetan Church in Old Goa last Sunday to protest against the under-construction bungalow. A part of the land on which it was being built had been bought by Manish Munot, the husband of Mumbai-based BJP spokesperson Shaina NC, in 2015.

On Thursday, village Panchayat members said they had sought a legal opinion in the matter, and that once they receive it on Saturday, they, too, would initiate the process to revoke the approvals granted for reconstruction of the property.

“We can’t call it legal or illegal. They had brought the permissions which is why we granted them the approval,” said Janita Madkaikar, Sarpanch of Se Old Goa. Panchayat member Vishwas Kuttikar said: “Until 2019, there was nothing but then the Save Old Goa Act Committee (SOGAC) started raising this issue. They also went to the High Court but they got no relief and their matters were disposed of,” said Kuttikar. He, however, added that it was recently brought to their attention that the Archeological Survey of India had granted permission only for repair and not reconstruction. “We have sought legal opinion. We have a meeting on November 30 after which we will initiate the process to revoke the approvals and issue a stop work notice,” he said.

The SOGAC has taken the matter to the Supreme Court.

The ground-plus-one structure with a tiled roof stands between the Mandovi River on one side and the St Cajetan Church on the other. It is a stone’s throw away from the Viceroy’s Arch in Old Goa’s heritage precinct.

Both Munot and Shaina had earlier said that they had no part to play in the allegedly illegal construction. Munot had also said that he had pulled out of the project.

Activists, however, continued to fast on Friday. They welcomed Kavlekar’s statement but said their protest would continue until the contentious structure was razed. Activist Anna Gracias, who joined the TMC last week, was fasting for the third day. Seated on a mattress under a tent opposite the Basilica of Bom Jesus in Old Goa, she said: “This statement is a good start. We welcome it but it is like giving a lollipop to a crying child.”

“Our demands persist for an order of demolition of the building that has caused irreversible damage to the protected monuments area of Old Goa. TCP should immediately update the regional plan for Goa and all operational, outlined and development plans and all protected areas should be marked and there should be buffer zones around all monuments in Old Goa,” Gracias said.

Fasting alongside her was Antu Fernandes, who had come from Quepem in South Goa, “I am here for our Saint (Francis Xavier). I come every year for this (pilgrimage ahead of the feast of St Francis Xavier) but this time I am sitting here. This is for our Goa, our home,” she said.

“She (Shaina NC) is not from Goa. People in Goa are never allowed to do such things,” said Maria Christina Varela, a retired government employee, who joined the fast on Friday.

The feast of St Francis Xavier falls on December 3 and Novenas ahead of the feast started on Wednesday. The fasting protestors sat with placards and pictures right across the Basilica of Bom Jesus. “If the chief minister does not take a firm decision on this matter by December 3 then the people of Goa will show their power. They will come in numbers much larger than what you saw last Sunday,” said Gracias.

While the Congress has been staging demonstrations against the allegedly illegal structure since July, on Friday, AAP Goa Convenor Rahul Mhambre and TMC MP and state in-charge for Goa Mahua Moitra also visited the fasting protestors. “It’s not good enough to build temples elsewhere in the country if you are set and hell bent on destroying the heritage of other states,” Moitra said, demanding that the structure be demolished.

Goa BJP chief Sadanand Tanavade had earlier distanced the party from the issue but said that if the structure is found illegal, it should be razed. On Wednesday, Goa’s Ports and Science and Technology minister Micheal Lobo had backed the protesters and said that if the Chief Minister did not take action against the structure in 48 hours, about two-three lakh Goans would gather in protest.

He said an “influential person” cannot come to Goa, “throw their weight around”, make calls to Delhi and Mumbai and do as they please in a heritage precinct. He said Goans will have to stand up to this and the structure will have to be razed. “The person who gave the permission has to be punished. It is a no-development zone,” Lobo had said.