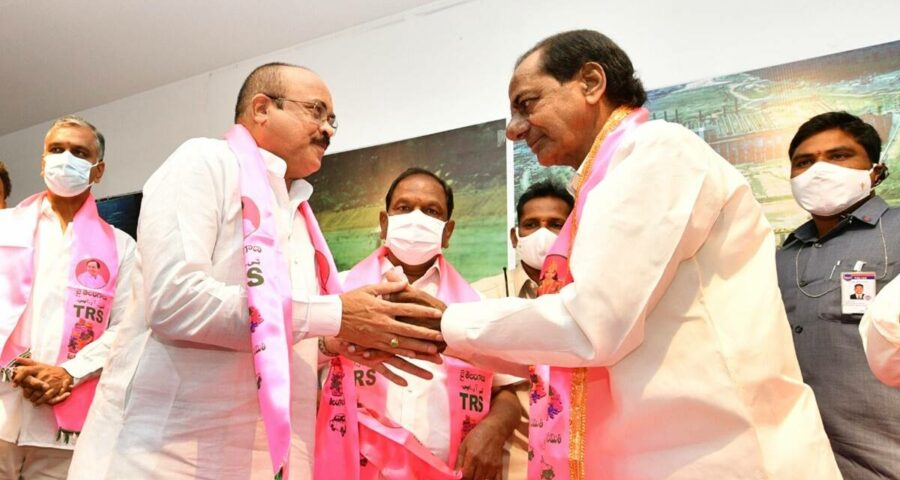 TRS president and Chief Minister K Chandrashekar Rao were present when E Peddi Reddy joined the party at an event. TRS president and Chief Minister K Chandrashekar Rao were present when Peddi Reddy joined the party at an event in the TRS office here.

Rajender had quit the TRS and the post of MLA after being removed from the State cabinet over allegations of land-grabbing which he had denied before joining the BJP. He is expected to be the BJP candidate in the Huzurabad by-election.

The Election Commission is yet to announce the schedule for the bypoll.

Peddi Reddy had represented Huzurabad in the Legislative Assembly and served as a Minister during the TDP regime in undivided Andhra Pradesh.

His entry is expected to help TRS in the bypoll. Recently, P Kaushik Reddy, who was the Congress candidate in Huzurabad in the 2018 Telangana assembly polls, joined the TRS.

Addressing the gathering after admitting Peddi Reddy into the TRS, Rao spoke on the endeavour of his government for the development of the State and the numerous welfare schemes being implemented for various sections of society.

“I am happy that there are no deaths due to hunger in Telangana. There are no (farmers’) suicides either…” he said. Migration for work and suicides used to happen earlier but now there are no more, he said.