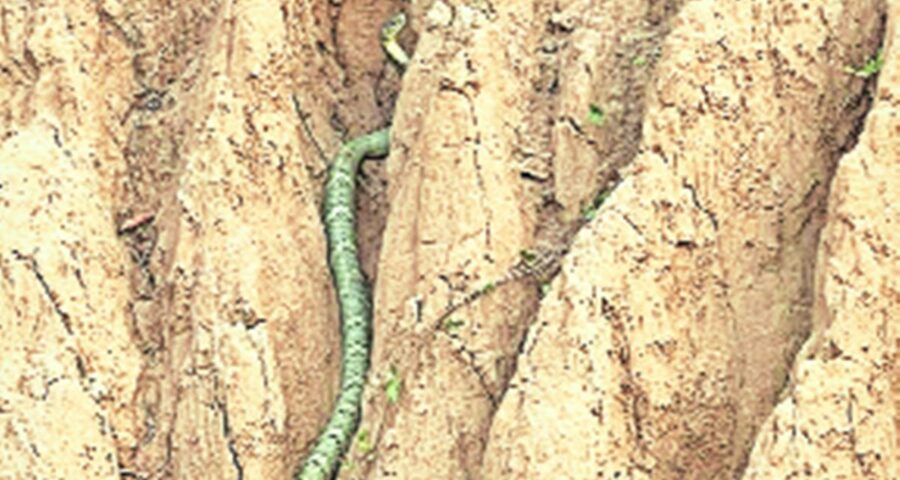 The elapid endemic, which has a wide distribution in Southeast Asia, was spotted near Girinagar adjoining the Kolar forest in Sirmour district of Himachal last week. HIMACHAL PRADESH Forest and Wildlife department on Saturday claimed to have documented, for the first time, the world’s longest venom snake, King Cobra (ophiophagus hannah), in the state.

The elapid endemic, which has a wide distribution in Southeast Asia, was spotted near Girinagar adjoining the Kolar forest in Sirmour district of Himachal last week. The King Cobra preys chiefly on other snakes and occasionally on some other vertebrates, such as lizards and rodents. It is a highly venomous and dangerous snake when agitated or provoked that has a fearsome reputation in its range, although it is typically shy and avoids confrontation with humans when possible.

A local resident, Praveen Thakur, had clicked the pictures of the snake on his cell phone and shared the same with the forest and wildlife department, Paonta Sahib. A team led by DFO Kunal Angrish later visited the sighting site and found the traces of the snake there.

Principal Chief Conservator of Forest (PCCF), Himachal, Archana Sharma, told The Indian Express, “We checked our records and found that a King Cobra had never been sighted/documented in Himachal Pradesh earlier. It is for the first time that this snake has been was spotted in Shiwalik Hills of Himachal. Earlier, Its presence in the nearby hilly state of Uttarakhand had been recorded. The sighting in Himachal Pradesh now is a very significant thing for us.”

APCCF, Himachal, Anil Thakur, said, “The sighting of an Asian cobra has already been recorded in the state. We documented the presence of a King Cobra in Himachal Pradesh for the first time recently. Basically, King Cobras are found in the Western Ghats region, and in Orissa, Assam, Bengal and Terai areas. It has marked its presence in Uttarakhand also. A team of wildlife officials from Paonta Sahib have visited the area and found traces of the snake there. Though, the team has not able to sight the elapid endemic.”

DFO, Paonta Sahib, Kunal Angrish, who first visited the sighting site, said, “A local resident Parveen Thakur had clicked the picture of this venomous snake, presuming it to be an ordinary snake that was extra-ordinarily long. But as he shared the picture on groups, someone forwarded it to our forest department personnel and wildlife wing. We checked and found that it was a King Cobra. We have got in touch with Parveen Thakur and are checking the area, which is in the Kolar forests of Paonta Sahib.”