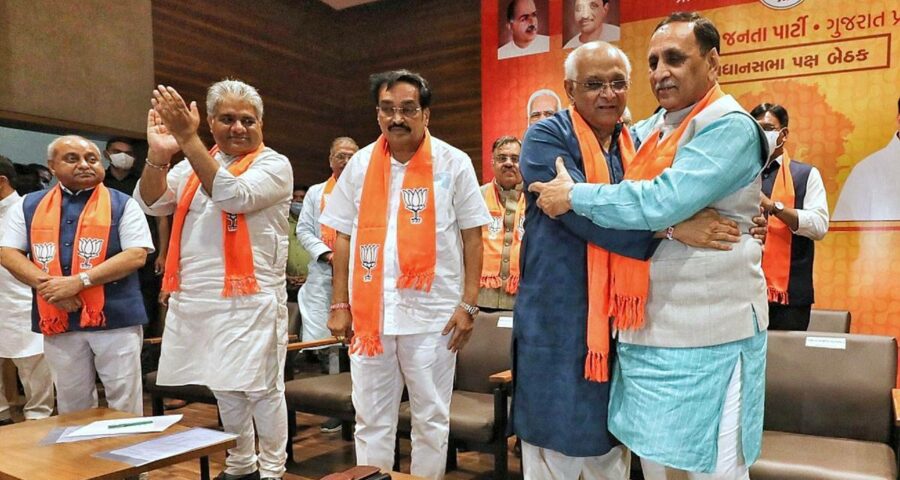 Bhupendra Patel, under whose leadership the 2022 assembly elections will be fought, contested his first major election in 2010 as corporator from the Ahmedabad Municipal Corporation. Among the earliest congratulatory messages for Bhupendra Patel, who was named Gujarat’s new Chief Minister on Sunday, was from the Vishwa Umiya Foundation, a body of Kadva Patidars. Patel’s elevation to the top job — he is the first from the Patidar sub-group to be Chief Minister — is crucial to the BJP’s plans to woo the community that has over the years drifted away from the party.

In fact, Patel, 59, is one of the trustees of Sardardham, the Patidar community organisation that hosted the programme where Prime Minister Narendra Modi was chief guest on Saturday, after which Vijay Rupani quit his job.

Patel, under whose leadership the 2022 assembly elections will be fought, contested his first major election in 2010 as corporator from the Ahmedabad Municipal Corporation (AMC). There too, he had a swift rise to the top post — he became standing committee chairperson in the AMC in his first stint as corporator.

Patel is a first-time MLA from Ghatlodia, the Assembly constituency vacated by former chief minister Anandiben Patel after she was appointed Madhya Pradesh Governor. In the 2017 Assembly elections, Patel defeated Congress candidate Shashikant Patel by over one lakh votes, considered to be the highest winning margin.

Patel began his political career from Memnagar Nagarpalika in Ahmedabad in the 1990s and served as president of the city civic body in 1999-2000 and 2004-06. Before contesting the corporation election, he also served as AMC school board vice chairman from 2008-10.

That Anandiben is among his mentors was clear when he told mediapersons after his appointment to the top post that “the blessings of (now Uttar Pradesh governor) Anandiben Patel have always been with me”. He also expressed gratitude towards PM Narendra Modi, party president J P Nadda and Union Home Minister Amit Shah.

Patel was chairman of AUDA (Ahmedabad Urban Development Authority) in 2015 and cleared major development projects in the Bopal-Ghuma area, which was under AUDA before its merger into the AMC in 2020. The fast-developing area on the outskirts of Ahmedabad is part of Amit Shah’s constituency.

Colleagues who have worked with Patel in the AMC and AUDA talk of him as “a simple, grounded person with a non-controversial image”.

“He is very straightforward and accessible. His ability to listen and give others the chance to speak shows he does not have any bias towards anyone,” said one of his close associates from the AMC.

Following the delimitation of Ahmedabad, he fought the AMC election in 2010 from Thaltej ward. The first-time corporator was appointed standing committee chairman, a position he held for two terms from 2010 to 2015.

Sardardham vice-president Trikambhai Zalavadiya, who retired as deputy municipal commissioner from AMC in 2008, told The Indian Express, “Despite holding such important political positions, he sat in the last row during Saturday’s event where the Prime Minister was the guest. Gujarat has got a low-profile, honest and hard-working CM.”

R P Patel, president of Vishv Umiya Foundation, said, “During Vishv Umiyadham’s foundation-stone-laying programme by Prime Minister Narendra Modi in 2019, Bhupendrabhai, despite being a founder-trustee and MLA, undertook the responsibility of managing the parking. We feel very proud that the CM is from the Patidar community. As CM, now he is for every community.”

A civil engineer and member of the Gujarat Institute of Civil Engineers and Architects (GICEA), Patel has been in the real-estate business for 25 years.

“His real-estate business, Vihan Associates, has largely remained confined to Ahmedabad. Over the last 10 years, he has not been active in the construction business due to his involvement in politics and his role in the AMC and AUDA,” said a leading real-estate developer in Gujarat.

A resident of Shilaj, an upscale neighbourhood where Anandiben too has her residence, Patel’s son and son-in-law too are in the construction business.

It was during Patel’s term as chairman of the AMC standing committee that a major part of the Sabarmati riverfront project and the Bus Rapid Transit System (BRTS) were completed, along with clearance for SVP Hospital, which was the second largest Covid hospital in the city at the peak of the pandemic.

Among his colleagues and friends, Patel is known to be God-fearing and religious. “He is a devout follower of Dada Bhagwan. That’s the reason we call him Dada,” said a former AMC official.