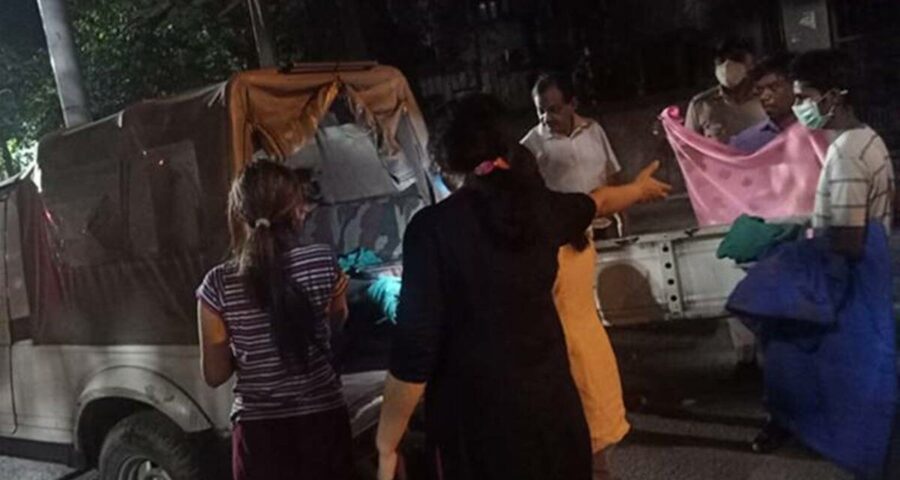 On March 5 last year, Pooja (35), who was nine months pregnant, waited for half an hour for an ambulance to take her to the hospital but said she received no response. Following the death of her husband two months earlier, she and her three minor children were alone at their Palam home. She said she called her relatives but no one came to help her.

At 7.48 am, her neighbour Ashok finally called the police control room and asked for an ambulance. “We thought she would lose the baby… She was experiencing labour pain and was crying. In 10-15 minutes, a PCR van arrived,” he said.

Head constable Shiv Kumar and constable Ravinder found that Pooja was about to deliver the baby. “We called a woman from a nearby shop to check her condition and found she was halfway through labour. Since there was no time to waste… we decided to deliver the baby with the help of Ashok and other locals inside the van. They provided us with towels and water. As soon as the baby was born, we rushed Pooja to the Cantonment hospital,” said a police officer who was part of the team that helped in the delivery.

Pooja, whose baby girl is a year old now, said the policemen came to her rescue when even her family and friends didn’t. On the occasion of International Women’s Day on March 8, she will join eight other women, some who delivered babies inside PCR vans en route hospitals during the lockdown, as guests at the Delhi Police Headquarters to honour personnel who assisted in the birth of their children. The personnel will be honoured by Delhi Police Commissioner S N Shrivastava.

Delhi Police will also launch 15 PCR vans run by women constables and officers. In the last year, PCR vans have helped more than 997 pregnant women reach hospitals in time and facilitated nine deliveries inside the vans.

Among the personnel being felicitated is constable Resham Kumari, who is posted in the PCR’s unit North Zone. Though most of her work revolves around responding to theft and violence-related calls, she said she was able to help several pregnant women during the lockdown.

On April 30 last year, she was on duty when she received a call from a colleague about a woman who was experiencing labour pain. The woman, Sangeeta (26), a resident of Gopalpur, was in a PCR van heading to Teerth Ram Hospital but her condition was sensitive. “We rushed to the spot and found that the woman was about to give birth. We covered her with a blanket, and I wore gloves and a PPE kit to help deliver the baby. I was proud and happy to see the baby. We shifted them to the hospital and the doctors appreciated my work,” said constable Resham.

Sangeeta, whose baby girl is 11 months old now, said she and her husband had lost all hope when no ambulance arrived. “This was our first baby. I was scared and thought I would lose my child. I am thankful to the policemen and Resham for their help,” she said.