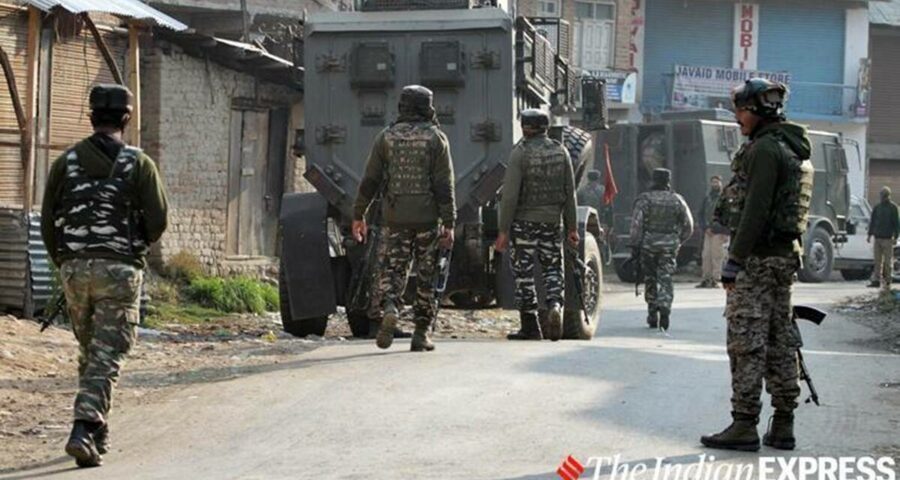 Poonch and Rajouri, the two districts along the Line of Control (LoC) with Pakistan, have remained on high alert since October 10 when the Army started looking for militants after information from locals about their presence in the Sangiote area in Poonch’s Balakot tehsil. After a three-week-long unsuccessful cordon-and-search operation for militants in a forested area on a high ridge in the Surankot-Mendhar area of Jammu and Kashmir’s Poonch district, security forces Saturday shifted their focus to an adjoining area in Rajouri district.

The vehicular traffic on the Rajouri-Thanamandi stretch of the Mughal Road was suspended and the forces extended their cordon-and-search operations to Khablan forests in Rajouri’s Thanamandi area.

Poonch and Rajouri, the two districts along the Line of Control (LoC) with Pakistan, have remained on high alert since October 10 when the Army started looking for militants after information from locals about their presence in the Sangiote area in Poonch’s Balakot tehsil.

This operation has turned out to be one of the longest against militants in J&K. It went into top gear after five soldiers were killed in the early hours of October 11 in the forested upper reaches of Chamrel, adjoining Dehra Ki Gali on the Mughal Road, and assumed urgency after four more soldiers were killed in Bhatta Durian, another part of the same forest, northeast of Chamrel, on October 14.

Now, the area of interest is Khablan forests, which, though in the Thanamandi block of Rajouri district, are connected to the forests at Dehra Ki Gali and Chamrel on one side and Bhati Dhar on the other.

The ongoing operation has raised several red flags for security forces. Among them is that this is the first time in a long while that security forces are battling what appear to be well trained and armed militants, who seem to be prepared for the long haul. Through the operation, which is now in its fourth week, the security forces have been taken by surprise at least three times by the tactical superiority of the enemy.

Most other militants trapped in encounters in recent months have barely picked up a gun when they are killed. This has only reinforced the assessment that this group of militants which has been keeping the army on its toes nearly all of October has crossed over the LoC, likely through Poonch. The crossing is believed to have taken place at least six weeks before the army received its first alert about them, senior security officials said.

While infiltration has always remained a challenge for the forces, the manner in which the Poonch-Rajouri areas have been targeted for militant crossovers from the middle of this year, after an all too brief lull following the India-Pakistan ceasefire renewal in February, is another red flag, the officials said.

Through July, the Army, and the police, separately and together, conducted days-long searches to look for reported infiltrators. In August, after an intelligence alert about the probability of “large scale infiltration through Rajouri-Poonch”, and three encounters in the general area of Rajouri, the Army said it was stepping up vigil on the LoC in that area.

The Rashtriya Rifles, the main counter-insurgency force in J&K, is at present not as numerous on the ground as it used to be in these two districts, after a redeployment from the area to Ladakh to beef up forces at the Line of Actual Control.

A former Northern Army commander who did not wish to be named said while strengthening the counter-infiltration grid at the LoC was vital, there was a “void” inland in the counter-insurgency grid due to the redeployment.

“There has been a thinning of counter-insurgency troops in the area, and those sitting across the LoC are probably aware of this void, that is why they are targeting these two districts,” the former Army official said.

Another concern is that the group, thought to comprise at least two men, but could be at least five or eight strong, has been too long in an area that is considered “pro-India” to have managed without local help for food and communication. At least 20 people of the area were detained for questioning, and some of them have been arrested for providing logistic support to the militants.

Security sources said at least since last year, there has been evidence of attempts to revive militancy in Poonch, a district free of it since the early 2000s, even though it has remained a route for infiltrating militants passing through to cross over the Pir Panjal and enter South Kashmir.

The NIA is investigating an alleged conspiracy to cause unrest in the district, taking over the case earlier this year from Jammu police after two seizures of arms and ammunition, in September and December last year. In February, a resident of Poonch working in Kuwait was extradited for allegedly financing the purported conspiracy. Some of the people wanted and arrested in that case are residents of the same areas of Poonch that the army was combing for militants in October.