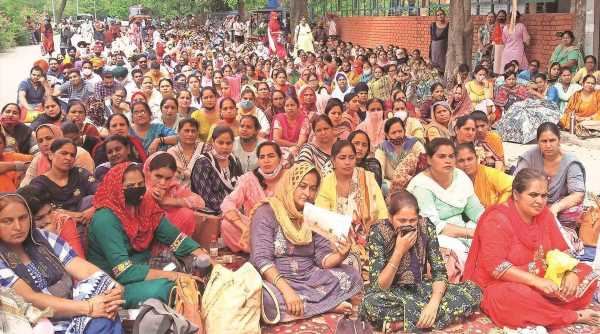 The teachers tried to hold a march towards Punjab Chief Minister, Captain Amarinder Singh's residence but were stopped by Chandigarh Police.

HUNDREDS OF teachers — under a joint banner of Punjab Federation of University and College Teachers’ Organizations (PFCUTO) — on Friday took a mass casual leave and marched to Sector 25 in Chandigarh, where they held a sit-in protest to express their ire against the unwarranted delay in the implementation of UGC grades in Punjab and Chandigarh which are yet to be implemented despite having been notified in November 2017.

The teachers later tried to hold a march towards Punjab Chief Minister, Captain Amarinder Singh’s residence but were stopped by Chandigarh Police.

Later in the day, in a statement, Dr Jagwant Singh, general secretary, PFUCTO, stated that the Punjab government had notified the sixth Punjab Pay Commission award and Chandigarh had endorsed it for its employees. “But the UGC pay scales that were to be announced with the Pay Commission award were still nowhere in sight. The teachers were the only ones now whose pay scales are yet to be revised. This is causing immense anxiety and hardship to the university and college teachers of Punjab and Chandigarh,” he said.

Dr HS Kingra, president of PFUCTO, added that Punjab was the only state which was yet to implement UGC pay scales notified in November 2017 and UGC regulations notified in 2018. “This has adversely affected the implementation of UGC pay scales in Punjab University, and in colleges of UT of Chandigarh and Himachal Pradesh, which adopt the notification of the Punjab Government,” said Kingra.

Dr NS Deol, president PUTA, Patiala lamented that they had been waiting for a long time for the resolution of their urgent issues, including the implementation of UGC scales. “Since there was complete silence on these issues, we have been forced on to the path of agitation,” he groused.

Dr Mritunjay Kumar, president PUTA, Chandigarh said, “It is unfortunate. During our discussions with the education department, we often received positive responses. But no progress is made on the ground. We have been impressing upon the Punjab government and the Chandigarh administration to do the needful but to no avail.”.

Dr BS Tohra, president GCTA demanded that the vacant posts in government colleges be filled up immediately. He said that the Employees’ Affiliated Colleges Security of Service Act-1974 be brought in tune with the judgments of the Supreme Court of India, and regularisation of at least 1925 aided college teachers be done at the earliest.

The protesting teachers on Friday said that they will intensify their agitation from September 5 (Teachers’ Day). The protests will start on Teachers’ Day at Punjab University. Thereafter, the teachers will protest daily for two hours by boycotting classes/ holding dharnas.
However, in the interest of the students, admission work will not be interrupted, they said.