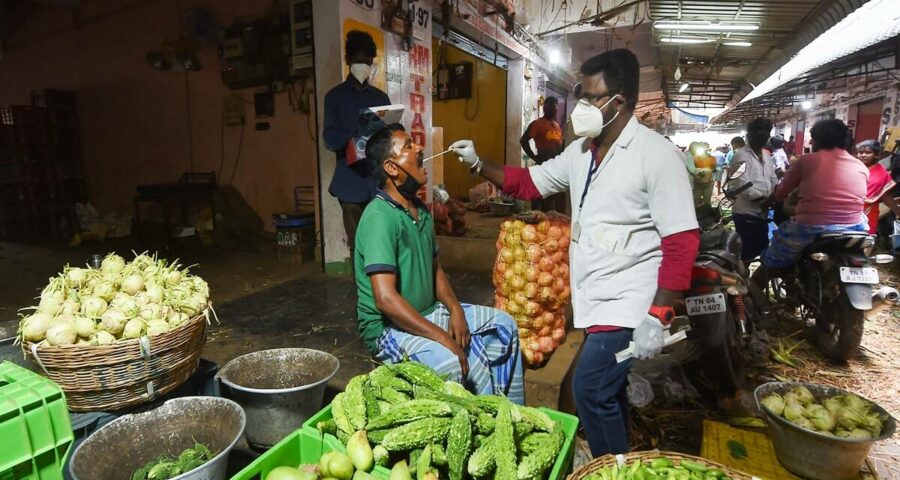 While medical facilities remain capable of handling the situation and essential medicines are in stock, the government is taking up campaigns across the state to escalate the vaccination drive by using public announcements and mobilising local groups, it was informed. On a day Tamil Nadu reported 7,819 Covid-19 cases on Wednesday – up from 6,984 cases reported on Tuesday – state health secretary J Radhakrishnan said the next two weeks are going to be crucial, and that the state government has no plan for a complete lockdown as of now.

“Maharashtra, which declared lockdown, has 60,000 cases per day and about 5 lakh active cases,” Radhakrishnan pointed out.

Tamil Nadu has 54,315 reported active cases as on Wednesday.

While medical facilities remain capable of handling the situation and essential medicines are in stock, the government is taking up campaigns across the state to escalate the vaccination drive by using public announcements and mobilising local groups, it was informed.

Radhakrishnan said the state has demanded 6 lakh more doses of the vaccine from the Centre. “The next two weeks are going to be crucial for us,” he said. “There may be a public impression that life is normal in the state but it is not. So people should stop going out. As the severity of the infection will be lesser among people who are vaccinated, we request everyone to volunteer to take the vaccine shots.”

He said hospital bed occupancy is under control and the state is also expanding the capacity of Covid care centres. He said over 6,500 ventilators are ready for use. “We have a stock of 1.49 lakh Remdesivir,” Radhakrishnan said.

State capital Chennai is reporting the maximum number of cases in the state. While the city has more than 18,000 reported active cases, including 2,564 cases reported on Wednesday, areas such as Teynampet, Anna Nagar had reported over 2,000 active cases each.

City corporation commissioner G Prakash said Chennai’s vaccination rate was about 40 to 42 per cent, with more than 9 lakh people out of its population of of 22 lakh above the age of 45 already vaccinated. “Including frontline workers and other categories, we have vaccinated a population of 1 million already,” Prakash said. The city also has an adequate stock of vaccines now, he added.

Several major cities in the state are running behind in vaccination rates. Of 9 lakh population (above 45 years) in Madurai, only about 1 lakh have been vaccinated so far. The district administration on Wednesday launched vaccine fests at 300 places. Officials said they have the stock of vaccines for the next 15 days.

The second largest city, Coimbatore, which reporting an average 500 new Covid-19 cases each day, had until Wednesday vaccinated 2.79 lakh people out of 9.85 lakh people above 45 years.

As part of tightening the Covid protocols, especially after an election season that saw massive gatherings across the state, the government has collected Rs 5.07 crore in penalty from 2.39 lakh people.