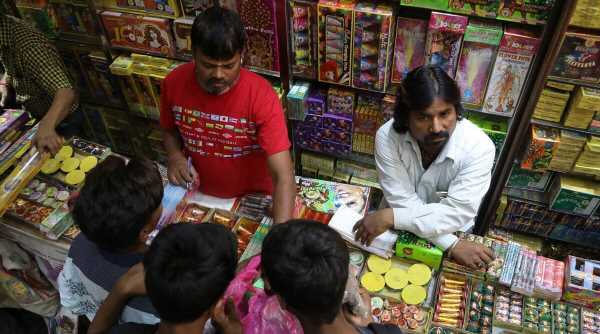 Justice Sachdeva said that the petitioners will have to go to the National Green Tribunal (NGT) or Supreme Court for clarification of the orders on the use and sale of firecrackers. The Delhi High Court on Monday said that it cannot allow the sale of firecrackers within Delhi even to those who may want to use them outside the national capital, where there may be no prohibition on its use.

“If somebody were to come, say from an area ‘A’ where the air quality is excellent and there is no prohibition and were to come to you in Delhi and purchase it from you, then the point of sale will be Delhi which would be in contravention of the order of the Supreme Court. The ‘sale and use’ means you can’t sell it in Delhi and you can’t use it in Delhi by bringing it from outside,” Justice Sanjeev Sachdeva said.

The court made the observations during the hearing of a petition filed by a group of traders, holding permanent licenses for the storage and sale of firecrackers in Delhi NCR, against the complete ban on storage and sale of any kind of firecrackers in Delhi. The petition was withdrawn by the counsel representing the petitioners after the court declined to interfere with the decision of the authorities.

Justice Sachdeva said that the petitioners will have to go to the National Green Tribunal (NGT) or Supreme Court for clarification of the orders on the use and sale of firecrackers. The court said that it is for the government to take a view if the traders based in Delhi want to ship firecrackers outside. “There is no question of them breaching the order of the Supreme Court or NGT in terms of selling somewhere where it is completely banned,” added the court.

The court said that today the traders are in illegal possession of the firecrackers as they cannot possess them without a license. “The limited permission they are seeking is that we will take it outside Delhi, to wherever it is permissible as per the local authorities there,” it said.

On the prayer for shipping the firecrackers outside the national capital, Delhi Pollution Control Committee (DPCC) told the court that any such order may be flouted directly or indirectly. It also submitted that in case such an order is passed, there needs to be complete disclosure about the transportation of firecrackers.

However, the counsel representing the traders after some arguments submitted that even transportation of firecrackers outside Delhi may not serve the purpose. She sought permission to withdraw the plea and the same was allowed by the court.