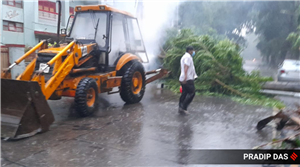 Ahead of the cyclone, around 389 trees were pruned around the city on Friday, especially near the jumbo Covid centres/field hospitals, to avert any untoward incident. As many as 479 tree-fall incidents were recorded in Mumbai within 12 hours starting 7am as heavy winds due to Cyclone Tauktae swept through the city on Monday.

Officials said the BMC usually records 600 instances of collapse of trees and branches over a period of one month during the monsoon.

Ahead of the cyclone, around 389 trees were pruned around the city on Friday, especially near the jumbo Covid centres/field hospitals, to avert any untoward incident.

Of the 479 incidents, 156 took place in the island city, 78 in the eastern suburbs and 245 in the western suburbs. Mumbai Central, Kalachowki, Byculla, Bandra, Andheri west, Worli, Colaba and Cuffe Parade were among the affected areas, with Colaba being the worst-hit. Civic officials said there was no injury, but vehicles were damaged in the incidents. “Today’s cyclone hit wind speed of 114 kmph, highest ever for Mumbai in any recent records. This is a climatic pattern that we have started studying, along with its maximum impact points, water logging areas and type of trees that are damaged,” tweeted Cabinet Minister Aaditya Thackeray, who visited the BMC’s disaster management room on Monday.

BMC officials said it was “unprecedented” to see over 400 trees and branches collapsing in a day. Last year in August, 612 trees fall-incidents were recorded in three days, when the wind speed had reached up to 107 kmph in Colaba.

During severe Cyclone Nisarga, which made landfall in Raigad in June, the total number of tree falls reported to the civic body was 117 – 39 from south Mumbai, 40 from the eastern suburbs and 38 from the western suburbs. Wind speed of 92 kmph was recorded in the city at that time. Experts have urged BMC to undertake a study of trees that have fallen during the monsoons, especially the ones which get uprooted. Many believe that over 50 per cent of trees that collapse are non-native species, unable to withstand heavy rainfall.

Every year, ahead of the monsoon season, between April and May, BMC trims and prunes over 70,000 roadside trees.