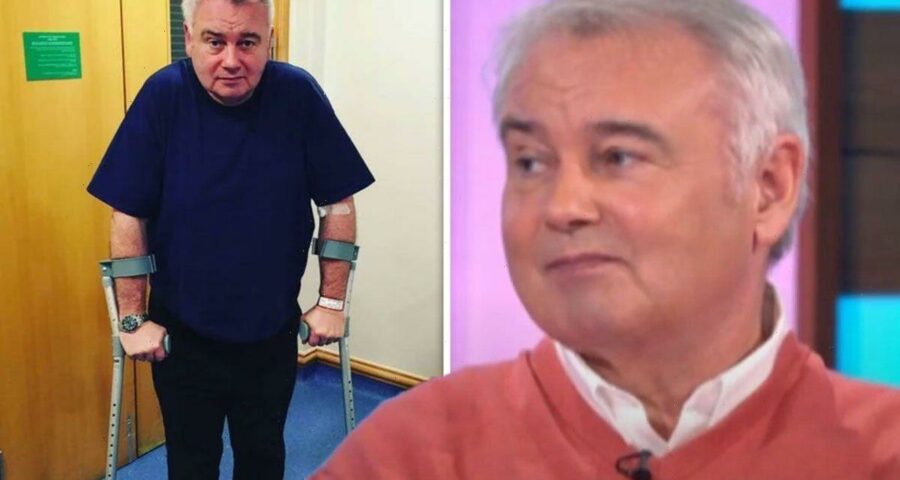 Eamonn Holmes is living with chronic pain due to problems with his sciatic nerve and is currently considering having back surgery. It comes after the GB News presenter underwent a double hip operation in 2016, after battling debilitating pain for 25 years.

The 62-year-old has spoken candidly about exploring different options to fight his nerve pain but added the idea of going under the knife doesn’t “fill me with joy”.

The TV news presenter said he is battling every day to cope with chronic back and leg pain and has been adopting various alternative treatments to become more mobile.

The former This Morning presenter revealed the pain can be so excruciating he finds it difficult to get out of his armchair.

But Eamonn shared that his pet dog Maggie was his motivation to get back on his feet – but revealed at present he has struggled to take his beloved pooch out on dog walks.

Eamonn said: “She’s sitting here beside me as my goal. She’s just the best girl and she deserves to be out walking with me every day and I miss walking with her. But at the moment I just can’t manage it.”

The GB News host, who is married to Ruth Langsford, recently took to Instagram and shared a photo where his osteopath had used cupping therapy to help ease the pain.

While Eamonn wants to try out new alternative therapies, the presenter admitted surgery may be his last resort.

“The idea of going into theatre and under the surgeon’s knife is not filling me with joy,” he explained.

“They’re talking about back surgery now and we are exploring all the options.”

He added to The Mirror: “It really worries me, it’s a big deal and the recovery period is five or six months and that scares me too. It seems like an awfully long time.

“In the meantime, I’m exploring other ways and all sorts of people in the hope that we can ease the pain and give me more time away from the surgeon’s table.”

Eamonn shared he is having to use crutches and walking sticks on a daily basis.

The veteran broadcaster added he is determined to get himself back fighting fit for his beloved rescue dog.

During the programme, the presenter admitted he had been “shuffling about” on his seat because he was struggling with the after effects of a back pain procedure he’d had the night before.

Eamonn told his co-star Rosie Wright, that the treatment – which aims to promote blood circulation – had left him covered in bruises.

“So I’ve got this problem with my back and sciatic nerve and someone recommended to me to get the circulation flowing around your body – that you should become more like a hedgehog.”

“This is me last night,” Eamonn added as viewers saw a picture of Eamonn with cylinders suctioned across his back.

Rosie commented the procedure looked “painful” as Eamonn admitted he hadn’t had to sleep with the cups on his back.

“Does it hurt?” Rosie asked and Eamonn replied: “Yes it leaves big bruises.”