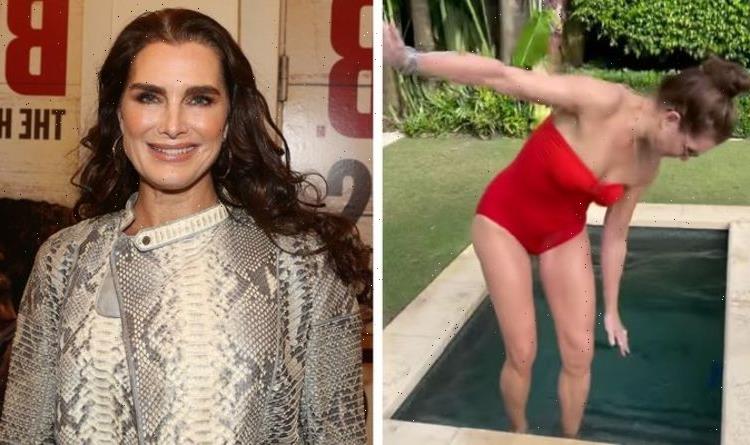 In the video posted to her official Instagram page, Brooke Shields stunned in a one-piece red swimsuit while her hair was effortlessly tied up in a bun as she kicked off her Thanksgiving celebrations with a new tradition.

The 56-year-old showed off her incredible shape as she made her way to the tub and began to lower her body into the icy cold container.

It didn’t appear as if this was the first time Brooke had taken a dip into an ice-cold pool, notably since she managed to place both of her arms inside the freezing water, taking one deep breath and slowly curling into a squat position.

Bill Withers’ song Lovely Day is heard in the background, creating quite the contrast between the laid back melody of the 1977 track and a shivering Brooke trying her best to contain her composure.

While wearing a retro pair of brown shades, Brooke attempted to play it cool while frantically trying to catch her breath, yet still managing to crack a smile at the person filming.

Brooke’s 1.4 million followers were clearly entertained by her antics after taking to the comment section to share their reactions.

One person, @mytrainerlive, joked: “Wait, a built in ice barge in your backyard?”

Other eagle-eyed fans praised Brooke after noticing that she was confidently walking with ease, having endured a horrific accident at a New York City gym back in January.

The Manhattan native sustained a severe injury when she fell off a balancing fitness board that reportedly flew her so high into the air; Brooke broke the most prominent bone in her body when she landed on her upper leg.

Brooke later revealed to fans that she was learning how to walk on crutches after being told by doctors that she had broken her femur, adding that it could take her months to fully recover from the incident.

“So glad you’ve been recovered from your accident Brooke! You look fabulous – happy for you,” IG user @sandircobey said.

A second fan, @ale__fontana_2, echoed similar words, writing: “Look how well your leg has healed. Are you sure you’re not Wonder Woman?”

Earlier this month, she continued to speak candidly about the horrendous ordeal, sharing that she opted not to take any painkillers after the accident in fear that she would become dependent on opioids.

Instead, Brooke relied on over-the-counter drugs such as Tylenol to help her with the “excruciating” pain.

She told Good Morning America: “I didn’t want to leave the hospital with no pain, get home, and think I was dying, because the pain was excruciating. I was like, I’d rather have excruciating pain in the hospital.'”

The Vogue model stressed that if she had continuously taken painkillers, she wouldn’t have differentiated the pain from her original injury and any other forming injuries that could have emerged in the recovery process.

“[I wanted to] get used to it and understand what’s pain and what’s further injury, because what happens is when you start to feel pain, you think you’re injured again, but you might not be as injured.

“You just might be sore or in pain. I wanted to really understand what kind of pain it was, because when you leave, and you go home, and you feel pain, you get really scared.”

Brooke is starring in the upcoming Netflix holiday film A Castle for Christmas, which hits the streaming platform on November 26.