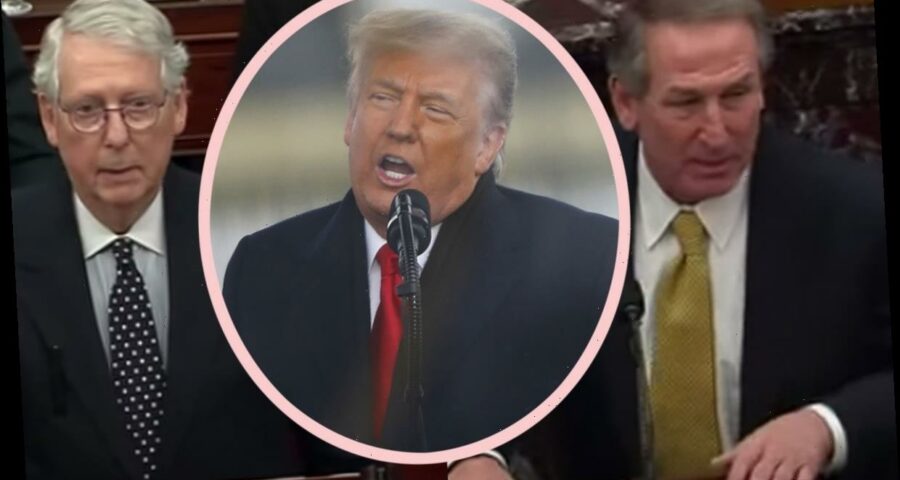 RAAAARGH!!! The verdict is in. The U.S. Senate has voted — for the second time — to acquit Donald Trump from impeachment. Seriously?!

On February 13, senators submitted their vote, and the results came back as the following: 57 people stood for guilty, 43 for not guilty. The unfortunate reality is that this does not meet the two-thirds requirement needed to impeach the former president.

So, looks like Darth Tax Evader (to borrow Jimmy Kimmel‘s nickname) won one battle. Still, hopefully Trump fades away for good after this. We doubt it, but one can hope!

Even though the Senate reached such a s**tty conclusion — one where Trump could come back in 2024 and run for office if he really wanted to — we did have people go against the Republican party for the sake of justice.

Some of the Republican senators who voted for impeachment include: Senators Richard Burr of North Carolina, Bill Cassidy of Louisiana, Susan Collins of Maine, Lisa Murkowski of Alaska, Mitt Romney of Utah, Ben Sasse of Nebraska, and Pat Toomey of Pennsylvania.

Minority leader Mitch McConnell, who has been outspoken about his views against Trump and his involvement in the Capitol Riots of January 6, spoke at length about his feelings on the matter after the vote. He directly stated he believed that Donald’s statements a month ago incited the riots, and that if he had been reelected or was still in office, Mitch would’ve voted to impeach him.

Hooooowever, Mitch referenced article 2, section 4 of the constitution, and his argument was based on the text that reads only the president, vice president, or a civil officer can be impeached. And that if there’s no office to kick someone out of, he believes there’s no practical reason to impeach.

Uh huh. Sounds like Mitch is playing politics to keep his party happy, if you ask us!

He continued by saying:

Okay, well, we don’t agree with Mitch’s assessment — ESPECIALLY because he was the one who initially said he wouldn’t hold Senate to address the trial until *after* the inauguration! Sounds awfully fishy to us!

It’s also beyond frustrating that the Senate seems to be acknowledging Trump’s involvement in the riots without granting justice.

What’s even crazier is the reports of how insane the Trump defense was! For example, they used Madonna’s statement about blowing up the White House to, we guess, justify Trump’s speech on January 6? Just absolutely bats**t crazy!

To which the entire Senate floor erupted in laughter! And then the dude practically yelled at everyone, stressing that it wasn’t a laughing matter (uh, it is when you mispronounce a city name!).

We’ll be honest — we were laughing hysterically, too, when we watched the clip… It’s Phil-a-delph-ia, Van Der Veen, not Philly-adelphia.

Anyway, what are your thoughts, Perezcious readers?! Sound off in the comments below!