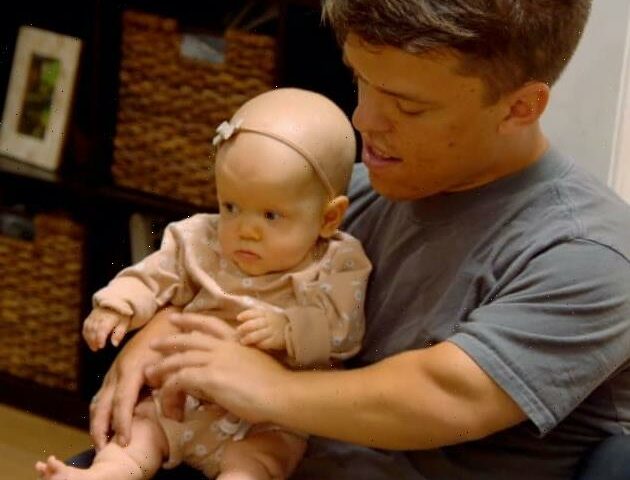 On this week’s episode of Little People, Big World, Tori and Zach Roloff were forced to deal with a topic no parent ever wants to confront:

The well-being of their two young kids.

Both four-year old son Jackson and 18-month old daughter Lilah were both born with achondroplasia, the most common form of dwarfism and also the same type that afflicts their dad and paternal grandparents.

Such a condition can have adverse health effects.

“Going into Lilah’s 9-month doctor’s appointment, we were a little worried about her weight gain, just because she’s so petite,” explained Tori in a sneak peek at Tuesdya’s installment.

“The doctor told us that she needs to eat high-fat foods — like avocado’s really good ’cause it’s healthy fats — and just chunk her up a little bit.”

Unlike his sister, Jackson faced almost no physical challenges at all during the first year of his life.

Tori and Zach have often remarked on how lucky the family has been as a result.

“Jackson and his first year of life, he had a couple ear infections here and there, but like, other than that … there’s nothing wrong,” said Tori on air.

“But then Lilah, her first year of life, she’s been sick.”

In a confessional, the mother of two admitted that it’s never been anything serious, but that doesn’t mean it hasn’t been difficult to deal with.

“I am just stressed,” she said to cameras. “I just worry about Lilah girl. She has made me into a worry wart.”

Then, there’s the issue of Jackson’s legs.

“We’ve been noticing that Jackson’s legs are starting to bow a little bit, so we’re going to take Jackson into the doctor to check out his legs and see if he does eventually need leg surgery,” said Zach on the episode, with Tori adding:

“I think with Jackson’s legs, it’s mostly just like, I don’t want it to get to a point where he’s hurting because I’m pretty sure it’s gonna have to be dealt with at some point in his life.

“I just want to make sure that we’re ready to move on it.”

Altogether, he’s gone under the knife 15 times, mostly just due to his achondroplasia diagnosis.

Tori and Zach are hoping they can nip their son’s issues in the bud before they grow worse and worse over time.

“I just don’t want to let it go too far. I want to know how to avoid two surgeries like you had,” Tori said, referencing what her husband has gone through.

“My first one was when I was like, 9 or 8 and it was growth plate on both legs, casts on both legs.

Zach went on to admit the recovery process was “brutal,” prompting Tori to say she isn’t “gonna be okay” if Jackson has to suffer in a similar manner.

Still, overall, the couple is trying to remain optimistic.

“Like, we’re not searching … for something wrong, we’re being positive.”

“I think that when things come up, like, anytime they’re sick or hurt or anything, we’re gonna come together as a family and take care of it.”