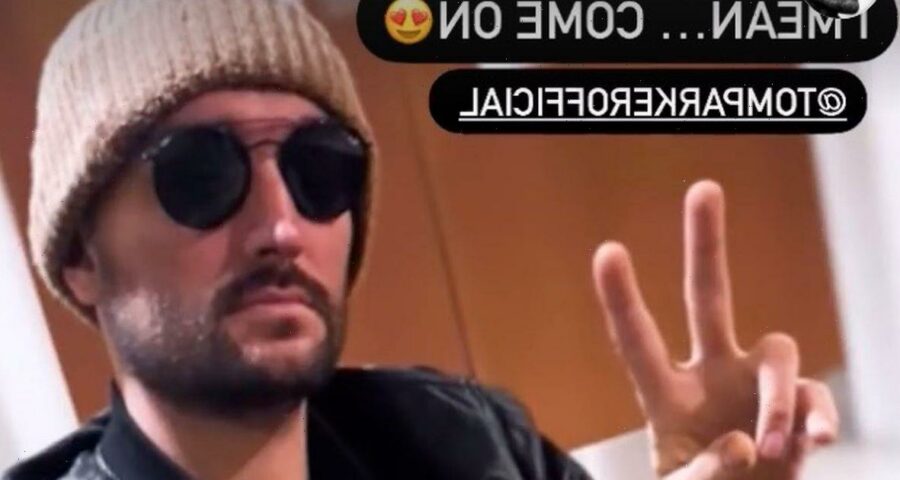 Tom Parker has been pictured using a wheelchair as he defiantly tours with his band amid his ongoing cancer battle.

The Wanted singer, 33, has been bravely fighting an inoperable brain tumour since he was diagnosed with it in 2020. He has been incredibly open about his journey so far.

Singer Tom recently announced he wouldn't be able to perform on The Wanted's reunion tour but later delighted fans with a surprise appearance on stage with his bandmates.

As Tom continues to join the lads on tour, Tom's fellow bandmate Max George shared a photo of the star on his Instagram story, showing Tom throwing up the peace sign as he sits in a wheelchair.

In the snap, Tom is dressed in a black jacket, T-shirt and jeans and accessorised his look with a beige beanie hat and black sunglasses as he posed for the photo.

Max couldn't help but gush over his pal as he shared the photo on his platform, he wrote on top of the image: "I mean… come on" followed by a heart eye emoji and added Justin Timberlake's song Sexy Back to play as the snap showed.

Strictly Come Dancing star Max, 33, has been looking after Tom as the star tours with his band And Tom has been sat in a throne as he appears on stage.

After their performance in Nottingham, Max shared a video of himself showing Tom in his bed.

Filming himself in the video shared on his Instagram story, Max told his followers: "Nottingham gotta say that was one of my favourite shows ever, you were absolutely amazing.

"In other news, look who's gatecrashed my party!" Max then spins the camera around to show Tom scrolling through his phone while sat in Max's bed.

Tom looks up and smiles widely at the camera as Max laughs and adds: "My lover of course! Anyway, thanks again and we love you loads."

The pair then later posed together for a selfie to mark the occasion. As they shared it in a joint Instagram post, Max wrote in the caption: "Nottingham, you were unbelievable!!! So much love in one room. Now for a Friday night spoon with @tomparkerofficial (who smashed it tonight!!"

It comes following reports that Tom was receiving "revolutionary treatment in Spain" for his brain tumour.

Tom has previously spoken out on his shock at the lack of treatment and funding available for cancer patients in the UK. And, The Sun states that a chemotherapy drug called Temozolomide has been the standard NHS treatment for glioblastoma patients for the last 20 years.

However, in the facility Tom was said to be staying at in Spain in February, he has an oxygen machine, massages and a special diet.

"Tom has been vocal that he doesn’t think the options available in Britain are perfect so he’s trying elsewhere," a source told the publication. “The tour means so much to him, he cannot wait."

They continued: "The cancer treatment he goes through takes it out of him so it’s been good to go abroad and relax."

For all the latest celebrity news, sign up to our daily newsletter here .