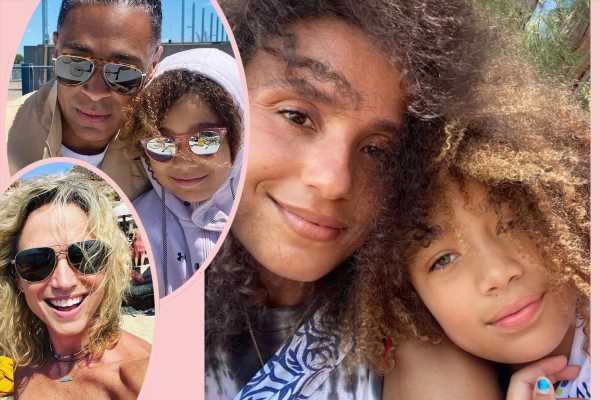 Is Marilee Fiebig trying to say something? Or is she just doing her job?

T.J. Holmes‘ estranged wife returned to Instagram recently but has yet to speak out personally on the shocking cheating scandal that blew up her life last month. In case you hadn’t heard, her husband was caught on video getting handsy with GMA 3 co-host Amy Robach. We learned pretty quickly the two had been having an affair for months. Seeing as both had been married to other people for 12 years, it was pretty rough for all involved. (And it’s gotten worse for T.J. and Amy, who were pulled off the air and are in all likelihood going to be fired.)

In all this chaos, Marilee is maybe the biggest victim. From what we’ve heard, Amy first separated from hubby Andrew Shue as far back as August, possibly just weeks into the extramarital romance. But T.J. never spilled to his wife — she found at the same time we did, when those photos and videos and co-worker accounts hit the internet.

We can’t imagine what she’s going through. What she has expressed has been through her attorney, who said in a statement:

“…we continue to be disappointed by T.J.’s lack of discretion, respect and sensitivity toward Marilee and the party’s daughter. During the holiday season and in light of the challenging times, Marilee’s sole focus has remained on the overall best interest of her 9-year-old daughter.”

Their daughter, Sabine, now 10 years old, was the subject of the only IG feed post Marilee has shared since the news of the affair and subsequent divorce proceedings. And on her Stories over the weekend she put up a very telling repost. She shared Save The Children‘s post about “What to do when… a child is worried.” The charity organization — which aims to promote and codify the rights of children worldwide “to grow up healthy, educated and safe” — gave tips about dealing with kids who are having emotional difficulties, like:

“Children may not share all their concerns because they do not want to upset you.”

It also reminded caregivers to “take the time to listen” and “reassure your child that feelings and thoughts make sense.” You can still view the whole thing on Save The Children’s page (below):

A post shared by Save the Children US (@savethechildren)

The question is, was Marilee trying to say something? She’d certainly have reason to think her child might be “worried” at the moment. Or… is she just fulfilling a work obligation?

See, Marilee is the Chief Diversity Officer of Save The Children. That’s her job. It could be she didn’t even put this repost together with what it might say about how T.J.’s actions have hurt their daughter. It could be…

What do YOU think, Perezcious readers? Subtle message? Or just a work post?