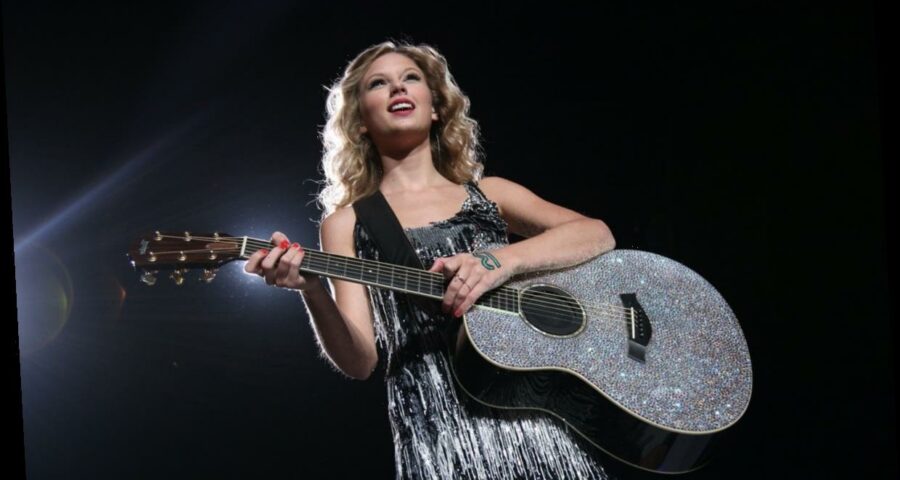 Swifties have had plenty to celebrate in recent months, and now fans can add Taylor Swift’s upcoming re-recordings to the list. Swift first revealed she’d be remaking her old catalog of songs in 2019 amid the Scooter Braun drama, and now it’s finally happening. The first album she’s set to do over is her 2008 studio album Fearless, which had fans wondering why she chose it instead of starting with her first album. The singer revealed why, and it turns out, Taylor Swift’s reason for re-recording Fearless first is a sweet, nostalgic look back.

Swift first revealed that she’d be re-recording Fearless on Thursday, Feb. 11, during a Good Morning America appearance. On the show, she also announced her updated version of “Love Story,” which dropped at midnight on Friday, Feb. 12. "I’ve now finished re-recording all of Fearless, which will be coming out soon,” Swift said on the show. She also announced the six additional tracks coming to the re-recorded album. "I’ve now gone back and recorded those so that everyone will be able to hear not only the songs that made the album but the songs that almost made it," Swift said.

The decision to start this re-release process with Fearless felt a bit strange to some fans, considering her first album was actually 2006’s Taylor Swift. The singer explained why she started with her sophomore album in a February interview with Republic Records / MCA Nashville. Per JustJaredJr., Swift said that she "always gravitated towards Fearless." She explained why, saying, "I think that, as an album, it was a real coming-of-age. And I look back on that album and it fills me with such pride, and it was an album about hope, and lessons learned, and the effervescence of teenage youth and all that. What [is] more fun than to go back and explore that?”

On Feb. 11, Swift took to Instagram to provide the deeper reason with her fans behind her choice to re-record Fearless first. She captioned her post, "I’m thrilled to tell you that my new version of Fearless (Taylor’s Version) is done and will be with you soon. It has 26 songs including 6 never before released songs from the vault." Her thread included a detailed note about the decision.

The letter detailed her pride in the album. "When I think back on the Fearless album and all that you turned it into, a completely involuntary smile creeps across my face. This was the musical era in which so many inside jokes were created between us, so many unbreakable bonds formed,” she wrote. She continued, “Fearless was an album full of magic and curiosity, the bliss and devastation of youth. It was the diary of the adventures and explorations of a teenage girl who was learning tiny lessons with every new crack in the facade of the fairytale ending she’d been shown in the movies.”

She dove deeper into her reason for the re-recordings, writing, "I’ve spoken a lot about why I’m remaking my first six albums, but the way I’ve chosen to do this will hopefully illuminate where I’m coming from." She continued, "Artists should own their work for so many reasons, but the most screamingly obvious one is that the artist is the only one who really *knows* that body of work."

The singer also revealed what one can assume is the official release date for the Fearless (Taylor’s Version), by capitalizing specific letters in her post, which together spell out "April Ninth."

If you’re feeling that sweet nostalgia just like Swift, stand by for her new version of Fearless to drop in April.