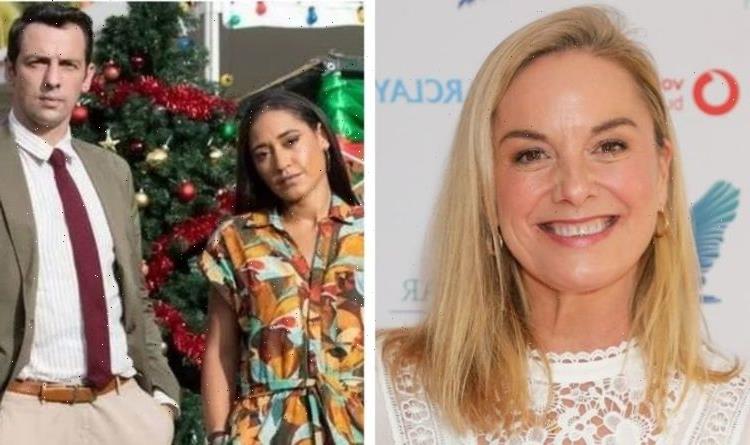 EastEnders legend Tamzin Outhwaite will be guest starring in a special episode of the murder mystery show Death In Paradise, alongside regulars such as former Two Pints of Lager and a Packet of Crisps star Ralf Little. The footage fans have been waiting for is set to air in early 2022.

To watch a programme that has sunshine and palm trees is a bit of a treat, let’s be honest!

Now that she’s finally accepted the chance to join the cast, Tamzin is relishing the opportunity to enjoy some winter sun on a paradise island.

“It’s something that I’ve been offered before, but never had the opportunity to do [until now],” she has revealed.

“I’m so happy I could finally do it!” she added, acknowledging that flying all the way to Guadeloupe took time out of her hectic schedule to plan.

“Filming every day in the sun is just so amazing. I felt like Shirley Valentine!”

As Brits shiver their way through another bracing winter, Tamzin feels the lure of escapism to a tropical island – even if it’s just via the TV – is a large part of the show’s appeal.

“For us Brits, to watch a programme that has sunshine and palm trees is a bit of a treat, let’s be honest,” she told OK! Magazine.

She also noticed there were relatively few competing shows on TV that rival Death In Paradise in the sun, sea and sand stakes.

“When I was there filming, I was constantly Googling other TV programmes that are filmed in similar locations to see if I could find another show that is filmed in the Caribbean,” she explained.

Tamzin has revealed she doesn’t miss being in EastEnders – and who could blame her when winter sun is on the cards?

However, she admitted that she does miss “being on the set daily”.

However Tamzin – better known to some as her former soap character Mel Owen – might be the show’s most highly anticipated new guest.

There’s plenty of fictional trouble in paradise to kick off this year’s episodes, including a drug trafficking case, a sinister golf course killer, and even a skydiver who is stabbed in mid-air.

Tamzin will channel a golf club owner with a “dark side” for her role.

Meanwhile Jason Done of Waterloo Road will play her husband.

“I can’t reveal too much about the character, but she does ­unsavoury things,” she teased to the Irish Mirror.

“She is a good mum and I don’t think she’s a bad human, but she’s got frustrated and bored in her marriage and it’s led her to doing bad things.”

She added: “I always find playing characters with a dark side more interesting. Nobody when they get to my age has no past at all, so it is nice to play a flawed character.”

The show was keen to secure her as a guest, but the affection seems to flow both ways.

“Over the years I’ve always wanted to do Death in Paradise,” she admitted.

“As an actor, it’s one of those things you want to tick off so it’s always been a bucket list job for me.”