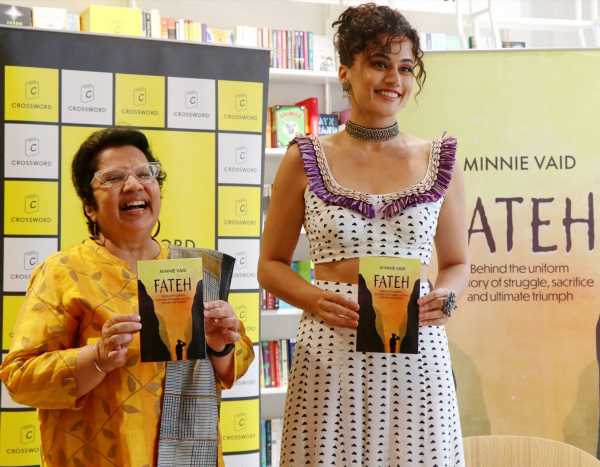 She has something to say about women achievers. Do you agree?
Photographs, Videos: Hitesh Harisinghani/Rediff.com

This is evident in her earlier books, Iron Irom: Two Journeys and Those Magnificent Women And Their Flying Machines: ISRO’s Mission To Mars.

Her latest book, Fateh, is the inspiring real-life story of a young Army widow who defies her patriarchal in-laws to become an army officer herself and raise a brave daughter.

It follows the emotional toll that her decisions extract and how she emerges victorious in this battle as well.

To launch the book, Minnie invited an actress as feisty as her protagonist, Major Archana.

Will, if the book becomes a movie, will Taapsee Pannu play Major Archana? She has already been part of Mission Mangal, the movie that celebrates the women scientists behind Mission Mangalyaan.

Taapsee calls herself a nerd.

Who has a confession to make about reading. And about books.

Taapsee, who played an intelligence officer in Baby and Naam Shabana, is yet to play a soldier on screen.

But she has made it her career to play strong, and inspiring women characters, the latest being cricketer Mithali Raj in Shabaash Mithu.

She familiarises herself with Major Archana as she reads an excerpt from Fateh.

Minnie Vaid calls Fateh “a classic fightback story”. She hopes it will inspire women “stuck in patriarchal harassment and torture”

And then, she introduces us to Major Archana, a young, pregnant 23 year old whose world shattered with her husband’s untimely martyrdom.

The story, says Taapsee, does not end with the bravery our soldiers show when they martyr themselves for the country.

That, says the actress, is when a new story begins. A story we most often don’t see. And don’t hear.

The story of the wives, and the families, left behind.

There is something about women achievers that Taapsee wishes would change.

So what made Taapsee the Taapsee she is today?

The actress, in candid mode.

More glimpses from the launch: 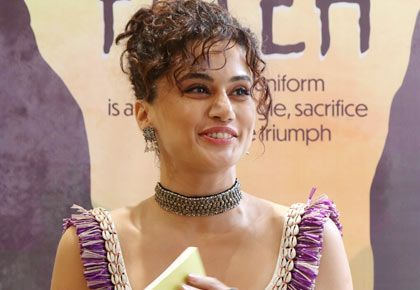