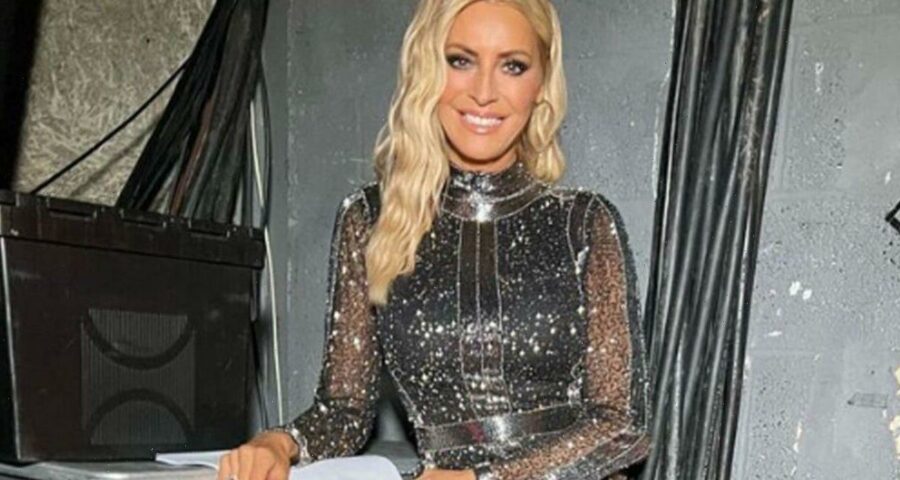 Tess Daly, 53, and Claudia Winkleman, 50, returned to the dancefloor on Saturday night for Strictly Come Dancing as they celebrated 100 years of the BBC, with the contestants dancing to theme tunes from famous shows. Despite some viewers being somewhat disappointed with the celebrities dancing to BBC theme tunes, others appeared momentarily distracted by the presenter’s attire.

Tess looked glamorous as ever in a metallic short dress which featured sheer arms with sparkles donned all over the stylish number.

The BBC favourite teamed her look with a pair of silver heels as she flashed her toned legs.

She styled her blonde tresses in loose waves and added gold eyeshadow with a lick of mascara and nude lips to accentuate her features.

BBC viewers turning into Strictly at home were blown away by Tess’s appearance and rushed to Twitter to comment.

Flowerbomb wrote: “Loving Tess’ dress tonight. For all those rating Claudia’s suit above it, have a quiet word with yourselves. #SCD #Strictly.”

Heather quizzed: “Has Tess got a new stylist? She’s been serving looks consistently this series #strictly.”

Meanwhile, others gushed over Angela Rippon’s surprise appearance on the dance show, as she covered a quick segment.

Viewers took to social media and cheekily shared that the veteran broadcast should “replace” the main Strictly presenters, Tess and Claudia.

She began: “The last programme we are going to be honouring this evening actually started way back in 1949, when there was only one television channel, and everything was in black and white.

“Now, it was one of the most glamorous and eventually one of the most colourful programmes on television. We certainly wouldn’t be here without it because we’re celebrating the BBC’s Come Dancing and it’s Kym and Graziano.”

Following her segment, fans rushed to comment on Angela’s presentation.

Elliot Da Babe tweeted: “Not to take anything from Tess and Claudia, they’ve done a wonderful job presenting Strictly but if it was presented by the effortless Angela Rippon, I wouldn’t be upset in the slightest.”

Gavin Williams wrote: “Get Angela as a permanent replacement for Tess #Strictly.”

Mark Carter gushed: “If ever Tess takes a week off, we now know who should cover! Angela Rippon’s appearance was a lovely nod to the original Come Dancing #Strictly.”

Lani added: “Can we have Angela every time?”

Tess has since taken to Instagram yesterday and penned a gushing tribute to Angela, as she accompanied the post with a photo of the duo.

During the show rehearsals, Angela and Tess could be seen in their casual clothes as they prepped for the show.

The Strictly host captioned the snap: “Got to hang out with the TV legend today! What a joy you are Angela Rippon!”

Strictly Come Dancing: The Results airs tonight on BBC One at 6.45pm.