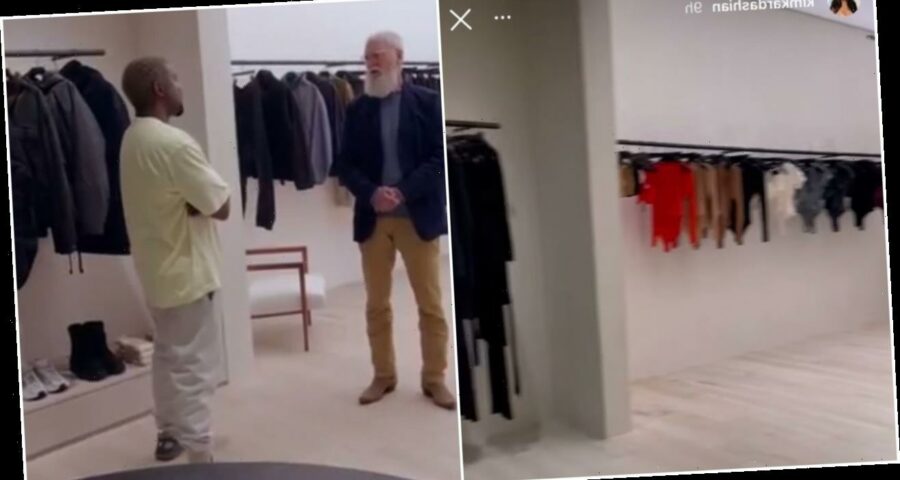 Neither Kim Kardashian nor Kanye West have spoken out about their widely-reported impending divorce, but it looks like there’s evidence that Kanye has permanently moved out of the couples’ Calabasas mansion.

Followers of iconic celebrity gossip Instagram account @deuxmoix were the first to sleuth out this switch-up, noting that Kim’s new Skims showroom looks identical to Kanye’s closet—which he once showed to David Letterman.

Here’s a closer look at Kim’s new Skims showroom—take note of the layout, including the wall and clothing racks:

Cool, now check out this photo of Kanye showing David Letterman around his Yeezy closet:

Unless Kim and Kanye have several identically laid out rooms in their home (which could be the case!) it looks like Kanye’s stuff has been cleared out. Though TBH it’s possible that this switch happened when Kanye moved to Wyoming—before divorce proceedings were underway.

Either way, Kimye seem to be on good terms—at least that’s the vibe I’m getting from Kim wearing a pair of Yeezys in a recent bikini pic:

And if you’re looking for the latest update on their divorce proceedings, a source recently told Us Weekly that Kim has been working with “her financial advisers to figure out an exit plan that would be best for her whole family,” adding that “Kim has had all of her and Kanye’s financials and properties ready to be split—it’s a very fair deal for everyone.”

You betcha these little magnetic travel containers are TSA-approved. Plus, they’re super cute.

According to TikTok, these leggings will make your ass look like a juicy snacc.

A cult-icon for a reason, this is the best hair-dryer brush overall.

If “sandwich” magnetic lashes aren’t for you, try this genius magnetic eyeliner.

If you want a rabbit that does more than just vibrate in place, this is it.

This is hands-down the best at-home laser hair removal product for leg hair.

More than 28,000 reviewers say this is the best hair straightener on Amazon.

Cheeky, lacy, and oh so sexy. No wonder they’re a bestseller.

You love all the nitty-gritty deets on celeb gossip. So do we. Let’s overanalyze them together. ✔️