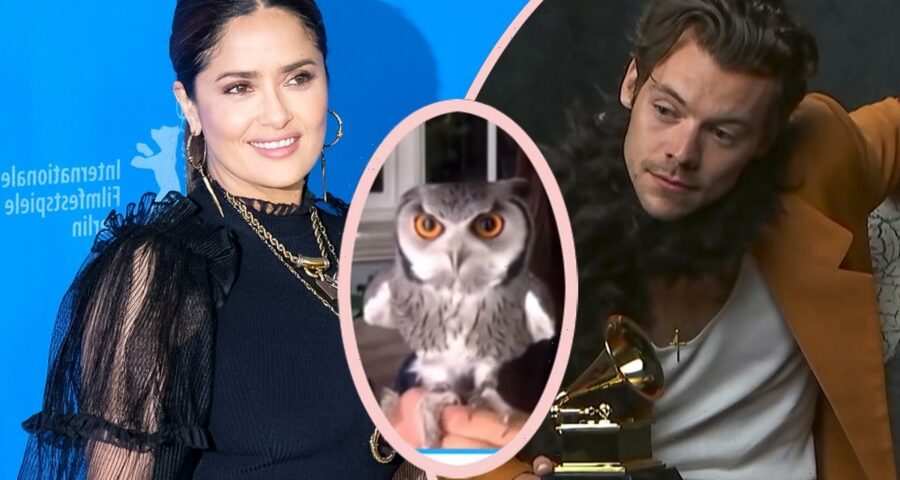 Salma Hayek has everything! Two movies coming out this year, a ridiculous bikini body, a pet owl, an insane Harry Styles anecdote…

Wait, what were those last two??

Yes, in case you didn’t know, the Hitman’s Wife’s Bodyguard star’s home is a bit of a zoo, and in it she has dogs, bunnies, horses, chickens, alpacas, a cat, and an owl. Kering is an honest-to-goodness pet who flies freely around her home — and even sleeps in the bed with her when her billionaire hubby is away. Though he apparently tries to eat her toes because he thinks they’re mice. Yikes!

But it wasn’t the nibbling that got to Harry. (It would be at our place! LOLz!) When the star came over, his owl experience was very different — and frankly a lot more gross!

During an appearance on The Ellen DeGeneres Show on Tuesday, Salma mentioned her pet, and the daytime host was fascinated! Ellen asked:

“When people come over, Salma, and there’s an owl, do people know that? Do they already know you have an owl or do you surprise them sometimes?”

Salma admitted she forgets to warn people — so Kering does fly in and scare people sometimes.

She laughed at the fact she’s seen “really big guys” run in terror of the little owl.

“I find it hilarious, I love it. I don’t do it on purpose though. But when it happens, I do enjoy it.”

One guy who wasn’t scared? You guessed it. Keeping the story discreet at first, she said:

“One time there was a very important celebrity, I will not say his name, and he was really excited about the owl and he was hoping that the owl would go on his head, because it was on me. He was like, ‘Oh, I need an owl in my life. How do you do that?’ And the minute he least expected it, she came on his head, but then she did the thing and this came out, this ball of rat hair was on his head.”

Ewwwww! It had eaten a mouse and was regurgitating the fur from it in a ball — right on the Sign Of The Times singer’s head! Basically it was vomiting on him! So gross!

But always the cool customer, Harry did not run away or get grossed out.

What WOULD it take to ruffle Harry’s feathers?? LOLz!

See the full interview, complete with a visit from Kering (below)!