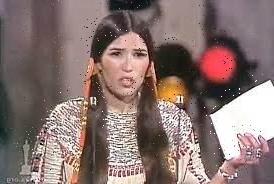 A new documentary, Sacheen: Breaking The Silence, details the memorable political stunt, which was a protest by Brando on the depiction of Native Americans by the film industry. Littlefeather, a White Mountain Apache, was enlisted as his proxy to decline the award on his behalf.

Littlefeather says Brando was delighted by her performance, but then felt abandoned by the actor when the ensuing firestorm erupted. As a result, Littlefeather claims she was “blacklisted” by Hollywood from her minor career in small films and television, and never worked again.

“It was the first time anyone had made a political statement at the Oscars,” Littlefeather says in the documentary. “It was the first Oscars ceremony to be broadcast by satellite all over the world, which is why Marlon chose it. I didn’t have an evening dress so Marlon told me to wear my buckskin.”

Littlefeather said she could “hear the boos and jeers” as she came on stage. She claimed, “I later learned six security guards had to hold back John Wayne, who was in the wings and wanted to storm on to the stage and drag me off.”

After the acceptance, she went to Brando’s house. “He told me I’d done a great job,” she says, but said the subsequent fallout made that praise bittersweet. “I was blacklisted – or, you could say, ‘redlisted’. I was ostracized everywhere I turned. No one would listen to my story or give me a chance to work.”