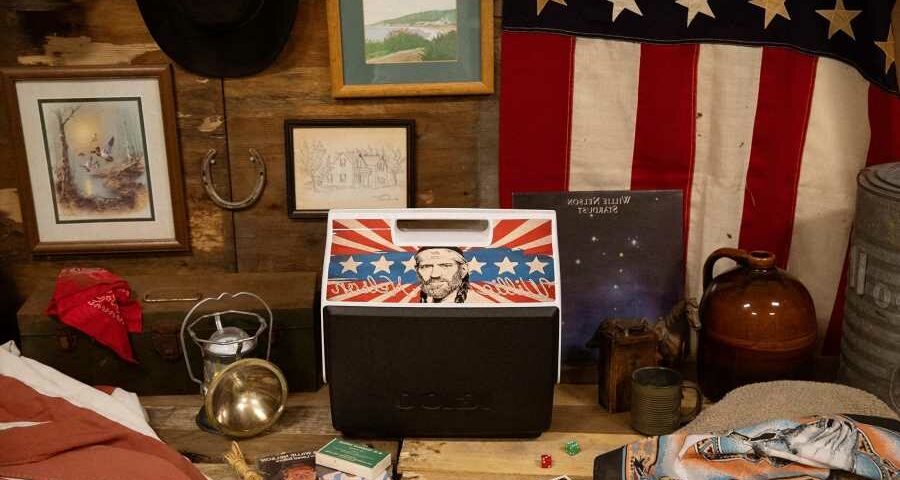 If you purchase an independently reviewed product or service through a link on our website, Rolling Stone may receive an affiliate commission.

When it’s finally time to get on the road again this summer, Willie Nelson fans now have a cooler that’s built for the long haul. To celebrate the country legend, Igloo has dropped its latest Willie Nelson Americana Playmate Classic, now available to buy online.

Part of an officially-licensed collaboration, the new cooler is a special-edition release that features a patriotic look. With Willie wearing a bandana front and center, the tent-top lid displays stars and stripes, all in red, white, and blue. And, for the one person in the entire world who might not recognize him, the cooler also says “Willie Nelson” underneath his portrait.

“There isn’t much that’s cooler than being able to say we’re going ‘On the Road’ again with a new Willie Nelson Playmate,” says Adrienne Berkes, vice president of marketing at Igloo, in a statement. “And this time, we’re specifically celebrating Willie as an American legend through an artistic Americana-focused design — perfect for fans who want their favorite musician represented on their favorite cooler.”

Though it’s a unique cooler, Igloo packed it with features that the company uses in its other popular eco-friendly models. That means you you can easily slide it open by pressing a side button, but it still seals shut to prevent any leaking during your commute. The newest Willie Nelson cooler collab has a 14-quart capacity, or, put another way, can fit up to about 26 12-ounce cans of booze.

The Americana release is the second piece from the Willie Nelson line. Igloo previously debuted the first Willie Nelson cooler earlier this spring, fittingly on April 20.

A Little Playmate product, it’s a slightly smaller design than the most recent Willie Nelson x Igloo collab, offering up space for about nine cans. Though it initially came in two colors, the orange style has already sold out, but the red style is still available on Igloo’s website at the time of this writing.

While this is the latest Willie-inspired collab, there’s a handful of cool new merch that fans can buy right now. In June, lifestyle and clothing brand Brixton released its Willie Nelson collection that includes a crop of new shirts and accessories like bandanas.

And if you’re hoping to see Willie live, you can catch him on the road throughout the rest of the summer on the Outlaw Music Festival tour. Tickets are still available for several dates, including Cincinnati, Ohio, and Chicago in August, and the last tour stop in Philadelphia on Sept. 23, with Chris Stapleton, Zach Bryan, Larkin Poe, and Brittney Spencer.