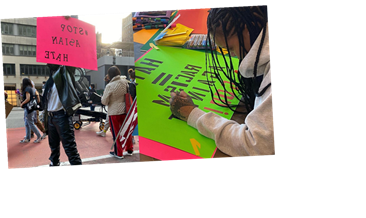 Rihanna may have been incognito, but she was heard loud and clear: Stop Asian hate.

The 33-year-old Fenty Beauty entrepreneur took to the streets of New York Sunday, joining her assistant Tina Truong at an anti-Asian hate protest.

Truong documented Rihanna’s participation on Instagram and shared photos of the “Ocean’s 8” actress holding up a neon green sign with the words “HATE = RACISM AGAINST GOD” and a bright pink sign with #StopAsianHate written across it.

Rihanna donned a hat, sunglasses and a face mask to march.

“This is what solidarity looks like!” Truong captioned the photos adding the hashtags #stopaapihate #stopasianhate #callitahatecrime.

“This cause hit close to home for me being Vietnamese American and Rih is very vocal when it comes to bringing awareness to injustices, domestic and global,” Truong told USA TODAY in a statement. “We’ve attended protests together before so when we heard about this one, we both felt compelled to take action again. There wasn’t a second thought to it, we just made our signs and hit the street.”

The rally in New York was one of many organized to demonstrate against violence toward Asian Americans and Pacific Islanders.

Rihanna joins other celebs and high-profile figures speaking out against anti-Asian racism.

Most recently, “Teen Wolf” star Arden Cho shared details about anti-Asian harassment she experienced, when someone hurled racial slurs at her and threatened to kill her and her dog.

“Please, please #StopAsianHate I can’t breathe. It feels like I’m 10 again & I’m being kicked to death,” Cho wrote. “My mom called me & I couldn’t help but start crying again. She’s so scared to walk outside, even in the day time. I’m sorry mom. She wants me to be strong. So I’ll try. Please help us.”

There has been a significant increase in violence against Asian American and Pacific Islander communities nationwide during the pandemic, including an uptick of 6 percentage points in online harassment, such as the use of racist and xenophobic slurs, according to a survey from anti-hate group ADL shared with USA TODAY..

In one recent incident, Roger Janke, 28, was charged with a hate crime after throwing rocks at an Asian woman and her 6-year-old son in the Los Angeles area and last month a shooting in Atlanta killed eight people, six of them women of Asian descent.

A rise in anti-Asian attacks: Here’s how to be an ally to the community.

Rihanna is no stranger to speaking out against injustice.

In the wake of George Floyd’s death last year, the beauty mogul took to social media to condemn police brutality and joined multiple entertainers in a petition supporting police reform.

“For the last few days, the magnitude of devastation, anger, sadness I’ve felt has been overwhelming to say the least! Watching my people get murdered and lynched day after day pushed me to a heavy place in my heart!” she wrote. “If intentional MURDER is the fit consequence for ‘drugs’ or ‘resisting arrest’….then what’s the fit consequence for MURDER???!”