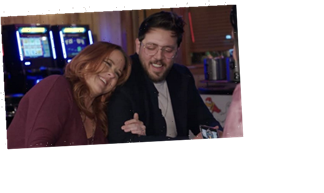 On Season 8, Episode 6 of 90 Day Fiance, Rebecca and Zied were reunited at last.

Rebecca wasn’t alone in waiting for him at the airport.

Like it or not, she had a pair of chaperones, as you can see in the video that we have included.

But before things got awkward, she and Zied were able to share a cheerful embrace.

Before the video clip that we have included begins, Rebecca Parrott’s part of the episode began with her getting ready.

Rebecca was, by her own admission, a nervous wreck as she put on makeup to go and meet her fiance at the airport.

It was finally time to welcome Zied Hakimi to America. And, as we mentioned, she was not going alone.

Tiffany and Micah have concerns about Rebecca, Zied, and the couple’s future together.

Tiffany loves her mom, and she and Micah both know what Rebecca’s abusive ex put her through.

Despite Rebecca’s protests, the two did not let her go alone — because they want to meet Zied for themselves.

Rebecca was all nerves as they waited for Zied, seeming almost sick to her stomach.

But when Zied came forward to see her, they were so happy — though they avoided too much PDA, as Zied comes from a reserved culture.

We don’t have to see a full on makeout session to see how these two were brimming with love.

“Yeah, I wanted to come get you myself only, but she told me today, ‘I’m coming with you,'” Rebecca awkwardly explained to Zied about her escort.

It would have been incredibly rude and off-putting if he went dang it, I don’t want to meet your dumb family, woman or whatever.

Micah chimed in with: “We thought he’d be a lot more enthusiastic as he got here, but …”

Something that Americans often learn when traveling abroad is that most countries are a little more reserved, and find it odd that we smile at strangers on the street.

In the car, Zied was overwhelmed by the experience.

Yes, he came to the US for Rebecca, but he’d never left his country before.

He eagerly filmed the city skyline as they drove, preparing to send the footage of America “just like the movies” to his friends.

Zied may be a somewhat stoic guy, but he’s not without excitement.

He gushed to the camera about how happy he was to be with Rebecca.

Of course, the chaperoning of Rebecca and Zied didn’t end there — it continued through dinner.

Of course, Tiffany and Micah decided to serve up dinner with some questions.

Their mini-inquisition included grilling Zied about his employment plans … even though he will not be able to legally work for months and months.

Zied has HVAC training that should carry over very well in the US. Honestly, they could have just asked Rebecca and spared themselves the embarrassment.