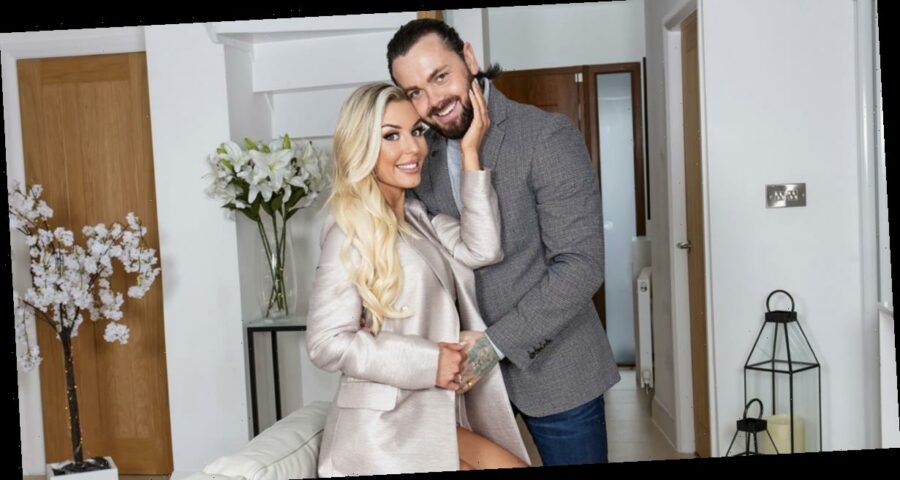 Ray Quinn has long been a fixture on our TV screens, from finishing runner-up on The X Factor to starring in Brookside and winning Dancing On Ice – twice.

But like many in the entertainment industry, he found his work outlook bleak in last year’s Covid-19 lockdown – and hit the headlines after taking a job as a Hermes delivery driver.

When we catch up with Ray and his dancer fiancée Emily Fletcher for our exclusive shoot, the star tells us he was “humbled” by his experience, which helped the couple save for their dream home in a challenging time. “I’m never shy of a hard day’s work,” he says.

Ray, 32, and Emily, 27, have been together for five years and got engaged in 2019, when he got down on one knee on New Year’s Eve. And while Ray is father to Harry, eight, from his former marriage and Emily has son Lucian, seven, from a previous relationship, the “broody” couple are also keen to start a family of their own.

Here, they open up to OK! about their tough times – including losing Ray’s dad in December – plus wedding details and planning for the future…

It’s been a tough time for the entertainment industry. How have you found things?

Ray: The pandemic has been an eye-opener. The hardest thing has been not being able to work and realising work is never guaranteed. But at the same time I’ve had quality time with my family. It’s taught me not to sit back and feel sorry for myself, and you have to leave your ego at the door.

Tell us about working for Hermes…

Ray: It was only ever temporary. I did it for about three months. I felt bored and needed to fill my time. It kept my mind occupied. I’m never shy of a hard day’s work.

Ray: I have massive respect for people who do it day in, day out. Some days you have 20 or 30 parcels, others it’s 100 and a route you’ve never done before. It was a humbling experience and I’m proud of it. There’s a sense of achievement. I’d done a full day’s work, earned a bit of pay and then got to go home to my family.

Did you ever get recognised?

Ray: Rarely, as we had to wear gloves and masks. I’d see someone I know and they’d be like, “What are you doing?” I’ve also done bits with my brother and his carpet-fitting business.

Ray: I think my industry in general is tough because you’re constantly chasing your next job. Before the pandemic hit, we were saving for our forever home and it put that on hold.

Emily: We’ll hopefully make an offer in March or April.

You both moved in with Emily’s family in the pandemic. How did that come about?

Emily: We were renting and then both our jobs stopped and we were like, “What do we do?” as the rental lease was coming up. My dad and stepmum offered us a room so we didn’t have to dip into our savings.

Ray: We’re forever in their debt. It’s allowed us to continue moving forward. At the moment we’re renting again, temporarily.

Do your sons get on?

Emily: They’re inseparable. The first time I met Harry I was ready with open arms, so our relationship is very loving. I look at Harry no different to how I look at Lucian.

Ray: It’s the same for me. Me and Lucian are like best mates.

How did you meet?

Ray: I met Emily in a nightclub in Liverpool. At first, she wouldn’t give me her number, but I was determined. I followed her to about four clubs. It wasn’t a stalker situation!

Emily: I thought, “He’s very eager!” We were getting ready to leave and he asked to chat and just kissed me! That kiss sealed the deal.

Ray: Without sounding too cheesy, after I kissed her I said, “Did you feel that?” There was something, not in my kecks, but a feeling [laughs].

When are you hoping to get married?

Emily: We thought 2022 but it may be later now, the pandemic stalled things. The venue we’ve found is a beautiful manor house. My engagement ring was the icing on the cake.

Ray: I had it specially made and designed it myself. The diamond was a gift from my mum from the engagement ring my dad bought her. Then, inside the ring, we have our two lads’ birthstones.

Will you invite any celebrity friends to the big day, Ray?

Ray: One of my best friends is Derry Mensah who was on The X Factor a few years after me. I’ll also invite Shane Richie’s son, Shane Nolan. We’ve been mates since we were kids because his auntie, Bernie, was my mum in Brookside. I’ll definitely invite Chris Simmons – I had a fantastic time with him on Hollyoaks.

Hollyoaks stars: Past and present

Ray: Yes! We speak about this quite often. I’d have more now but Emily is sensible.

Emily: If we were in our home there’d be no question. But because I’m still quite young, I want to enjoy our relationship. But we’re so broody!

Ray: I’m always broody! But as we both had children young it’s nice to have other experiences.

Emily: I think I’d like two, so we’d have four. I was 20 when I had Lucian and he was turning three when Ray came into our lives. He’s helped me become a better mother.

We were sorry to hear you lost your dad, Ray…

Ray: He had cancer most of his life, on and off. It ended up spreading everywhere. He was given six to eight months with chemo but six weeks later he was gone. I adored him and he was my best friend. When me and Emily get married, our first dance will be the same first dance my parents did. It was Emily’s idea, it blew me away.

We loved seeing you in Dancing On Ice recently, Ray. What was it like being back?

Ray: It was great. I’m never shy of getting my skates on. People are being knocked out left, right and centre this year. It’s the 13th series so it was bound to go wrong somewhere! It’s not my place to say whether or not they should carry on, but my skates are ready if I ever need to defend my title!

What’s next for you?

Ray: I’m in a Rat Pack show called All Singing! All Swinging!. It will be touring from May and I’m really excited. It takes me back to my first love of swing and doing all the songs I became known for on The X Factor.