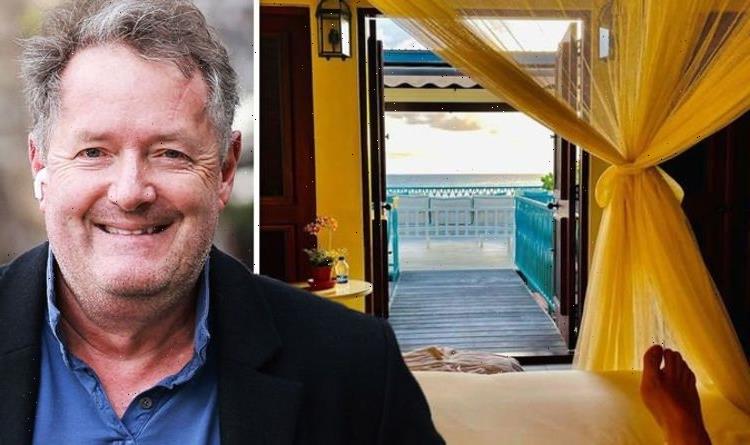 Dr Hilary jokes about Piers Morgan being nominated for NTA

Former Good Morning Britain presenter Piers Morgan, 56, has said goodbye to the last of the English summer as he jetted off to Antigua for a relaxing break earlier this week. The TV personality was accompanied by his three sons, Spencer, Bertie, and Stanley, while his author wife Celia Walden and youngest child Elise remained back home in rainy London.

Current view. As my sons would put it… ‘not too shabby’

The ITV star’s long-awaited holiday comes a month after he contarcted coronavirus at the Euro 2020 final at Wembley.

But since then, he’s been having fun documenting his time away at luxury hotel Jumby Bay Resort in Antigua.

This isn’t the presenter’s first visit to the exotic island, as he’s been multiple times before during breaks from his former presenting role on GMB.

On Monday, the star and his three sons jetted out of London on an eight and a half hour flight to the Caribbean island.

The next day, Piers revealed that he had finally made it to paradise.

Sharing a sun-drench snap of a sandy beach, the star showed off his enviable holiday destination.

Piers went on to showcase the breathtaking view from his bed, which featured a netted canopy tied back to allow the sun to shine in.

With one leg draped lazily across the duvet, Piers penned: “Current view. As my sons would put it… ‘not too shabby’.”

Quick to respond to his dad’s post, Piers’ eldest son Spencer wittily replied: “Sadly he lost his right leg on day one of the holiday.”

He too documented his time away with a snap of himself enjoying time in an infinity pool against a backdrop of the crystal-clear sea.

The former ITV newsreader no doubt selected the hotel for its luxury services and exclusive setting.

Jumby Bay, which is part of the luxury Oetker Collection of hotels, is right next to white beaches and features lush green gardens and over two kilometres of palm fringed paths.

It also features three alluring pools, numerous beaches, and a spa to relax in.

The hotel’s all inclusive experience offers everything from dining at a chic beach party, to rum tastings and Caribbean cooking classes.

Watersports including wakeboarding and hobie cats are also on offer, as are boat trips and snorkelling.

Piers will no doubt be making the most of the sunshine while he’s away after revealing just how horrific he felt after catching Covid last month.

“Looking and feeling like Tom Hanks towards the end of Castaway. Need a Wilson.”

In another, he told how he was feeling as “rough as a badger’s backside”, after sharing that he had lost weight thanks to the virus.