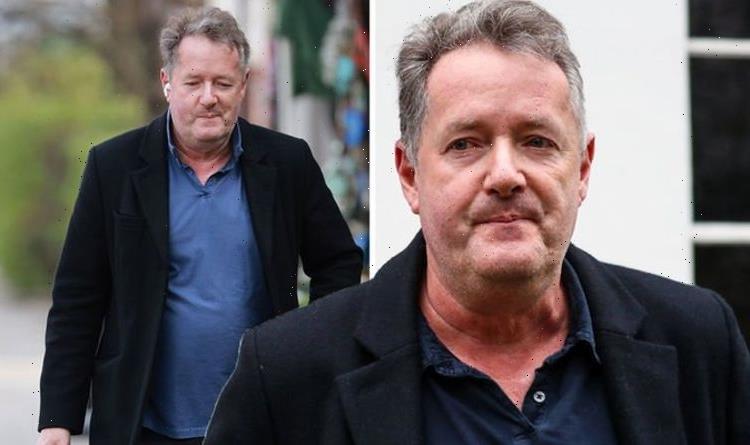 Have I Got News For You: Stephen Mangan mocks Piers Morgan

Piers Morgan took to Twitter and shared a heartfelt message today after the news anchor stepped down from his role. It was announced that Fred Dinenage is set to leave ITV News Meridan at Christmas.

After nearly four decades, one of ITV’s longest-serving regional news anchors has quit.

Taking to the micro-blogging site, the former Good Morning Britain host took the opportunity to offer his well wishes to Fred.

In view of his eight million followers, Piers branded Fred a “legend” before being inundated with comments.

Lorraine Kelly commented: “How can this be happening.”

Loose Women presenter Charlene White remarked: “Oh wow… what a loss to the ITV family. I first met Fred in my late teens on work experience at @itvmeridian and he was (and continues to be) just as wonderful and kind and brilliant as I’d hoped. You’ll be missed @freddinenageITV.”

Viewers also flocked to comment on the post, as Alan Fisher wrote: “Give that man a round of applause.”

“That’s a shame. He is a really good TV presenter I love this guy, I met him once as well,” @djspeedy34 added.

For the past 12 years, he has co-hosted ITV News Meridian with Sangeeta Bhabra who Fred describes as “the most marvellous person to work with.”

He has enjoyed a longstanding career in media having presented regional programmes made by Southern Television and its successor TVS, including Tell the Truth and Coast to Coast.

In the 1970s he covered the regional sport for Yorkshire Television and went on to host the network ITV Saturday afternoon show World of Sport, a role that saw him cover two Olympic Games.

Fred became a household name on the children’s television programme How?

Last year, the presenter appeared in every episode of a new series of the show, made for CITV.

In a statement to ITV News, Fred admitted it was a “tough decision” to step down from ITV Meridian.

He said: “After almost 38 years co-presenting the ITV six o’clock show in the south and south east I’ve finally decided to hang up my microphone.

“It’s been a really tough decision but I now want to spend a few years with my wife, Beverley, and our three dogs ‘smelling the roses’ in my garden and spending time in the mountains of Austria.”

“I will be continuing with my crime programmes and ITV’s ‘How?’ and writing books, including one recently commissioned. But now I feel it is the right time to move on,” Fred continued.

“I will miss my dear co-presenter, Sangeeta, and my colleagues at ITV Meridian terribly.”

He added: “And, of course, I will miss our wonderful viewers who’ve given me such incredible love and support for so long.

“I’ve been so lucky in my life and career – 58 years working non-stop on regional and network programmes with ITV and I’ve been blessed by having a truly special family. So, to everyone – thank you.”