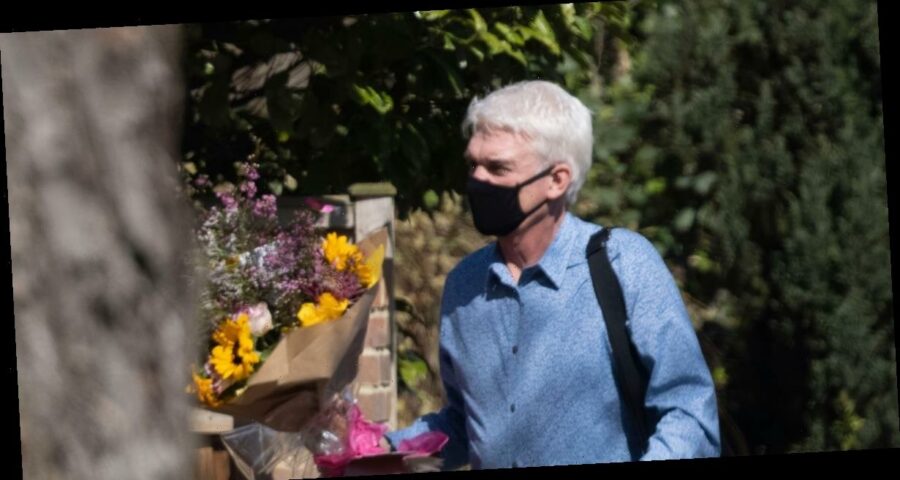 Phillip Schofield has been spotted carrying a bouquet of flowers on his wedding anniversary after coming out as gay over a year ago.

The 58 year old, who recently told Meghan Markle and Prince Harry to "shut up" after their explosive Oprah Winfrey interview, tied the knot with Stephanie Lowe on 29 March 1993.

Despite revealing he's gay in an emotional confession last February, he appeared eager to celebrate the milestone with the mother of his children.

The This Morning star wore a light blue buttoned-up shirt alongside a pair of skinny blue jeans as he walked down the street carrying a bouquet of flowers, which featured gorgeous yellow sunflowers.

Phillip teamed the outfit with some navy trainers and had a black bag draped over his shoulder. He also donned a black face mask, ensuring he keeps protected against the ongoing coronavirus pandemic.

The TV personality, who recently joked Piers Morgan is "quite expensive" as he asked GB News chief if he'll offer him a job, appeared to still be wearing his wedding ring, too.

Phillip revealed that he is gay in a statement shared on Instagram last year, which read: "You never know what’s going on in someone’s seemingly perfect life, what issues they are struggling with, or the state of their wellbeing – and so you won’t know what has been consuming me for the last few years.

"With the strength and support of my wife and my daughters, I have been coming to terms with the fact that I am gay."

Since then, he's opened up on his marriage to Steph in an interview on BBC Radio 5 Live, explaining that they are just trying to "pick our way through" as a family.

When asked how his relationship with Steph is now, he replied: “We love each other massively.

“We are a loving family, that hasn't changed… it's us four but different.

“We are a work in progress. I've been very honest about all of this and there's no question, we have to pick our way through this daily as a family.

“And that's what we are doing. We are making our way through very unusual and unexpected waters.”

Phil, who previously said he and Stephanie haven’t discussed divorce, has also been incredibly open with his own personal struggles leading up to his emotional This Morning interview in February where he first discussed his sexuality.

When asked how he is doing now, Phil replied: “I am ok, I am still a work in progress.

“I still have to come to terms with my life and with me.”