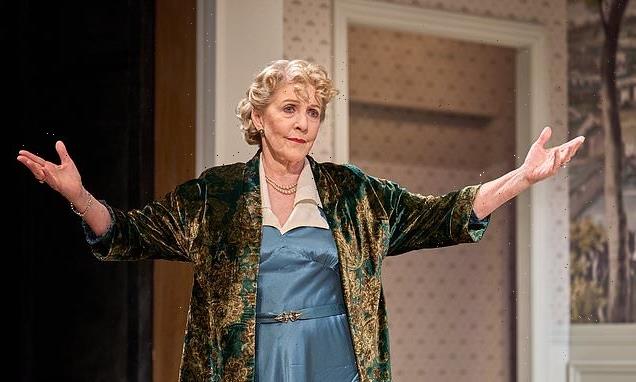 It’s a hodgepodge of storylines, but this World War II drama has a Casablanca thrill to it: PATRICK MARMION reviews Watch On The Rhine

Verdict: A lot to keep your eye on

Unless you have four legs and body fur, a dog’s dinner is not often an appetising prospect.

One possible exception is this intriguing World War II melodrama set in 1940s America, which is illuminated by the perma-posh savoir faire of Patricia Hodge.

It starts off looking and sounding like a Noel Coward drawing-room comedy, with Hodge’s rich and haughty American matriarch firing off exquisitely turned one-liners. ‘I adore snooping,’ she remarks. ‘It shows an interest in life.’

She goes on to shape up as a latter-day Lady Bracknell. But thanks to the return of her daughter after 20 years in Europe (with German husband and three kids in tow), Lillian Hellman’s story soon starts to look more like an Ibsen family tragedy, where long-buried secrets are set to be exhumed. 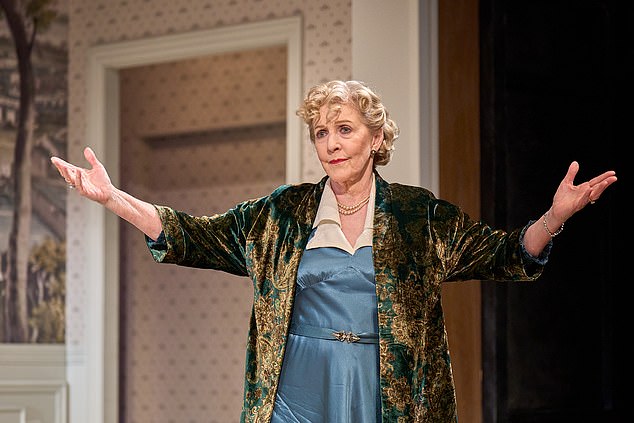 Unless you have four legs and body fur, a dog’s dinner is not often an appetising prospect. One possible exception is this intriguing World War II melodrama set in 1940s America, which is illuminated by the perma-posh savoir faire of Patricia Hodge

Particularly ripe with resentment is Geoffrey Streatfeild as Hodge’s middle-aged son, crushed by his mother’s withering wit — yet launching salvos of his own, while guzzling brandy at breakfast.

He, moreover, is on the precipice of an illicit affair with the wife of a dastardly Romanian count.

But it’s that count who supplies the central antagonism. Played by John Light, this scheming scoundrel who’s down on his uppers has unearthed a dangerous secret about the daughter’s furtive German husband — a man who claims to be a professional anti-fascist and has the broken fingers, bullet scars and tales of the Spanish Civil War to prove it. 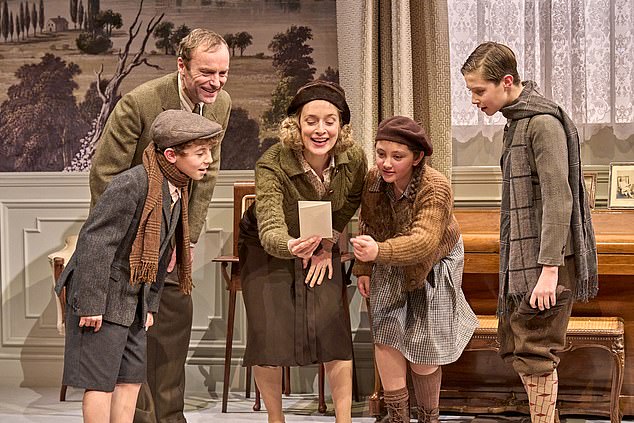 It starts off looking and sounding like a Noel Coward drawing-room comedy, with Hodge’s rich and haughty American matriarch firing off exquisitely turned one-liners. ‘I adore snooping,’ she remarks. ‘It shows an interest in life’

Although Waschke’s brooding intensity nearly turns this Teuton into a Mills & Boon romantic fantasy, Hodge is pleased to note he doesn’t ‘make platform speeches or try to convince people of anything’ . . . until, of course, he does both.

Not only do these two men’s stories take the drama in the direction of a Casablanca type thriller, even more intriguingly, the deal they strike is reminiscent of the Maltese Falcon (perhaps unsurprisingly, given that the film is based on the book written by Hellman’s partner Dashiell Hammett).

Scarcely less intriguing is David Webber as the Paul Robeson-style butler, who seems forever on the brink of pulling a subversive stunt. And to the already overloaded cast you can add the three precocious children of Hodge’s warm yet oddly anonymous daughter (Caitlin FitzGerald).

Fascinating though this is in its many parts, the proliferation of themes, tone and characters precludes any deep emotional involvement.

Nor does it help that the sight lines in Ellen McDougall’s congested production are frequently terrible — one silent actor parked in front of four speaking ones.

All the while, an ominous hum suggests rising tension in Tingying Dong’s sound design (although this could just be the theatre’s over-active air-conditioning . . . keep your coat on).

With so many strands, some theatregoers may wind up baffled about which one to follow. But it’s hard not to find yourself engaged with this dramatic hodgepodge that somehow remains rather tasty.

Originality is a precious commodity in a theatrical world that is often too eager to run with the herd. Young Irish writer Margaret Perry is, therefore a bracingly, non-conformist prospect who suggests she could have a big future — thanks to her batty new comedy, Paradise Now!

The play is a long, scatty yarn about modern-day Avon Ladies, working from home and flogging essential oils on social media.

Perry’s oddball half-dozen include a couple of nervous, nun-like sisters from Cork (Michele Moran and Carmel Winters), one of whom falls under the spell of the London rep (Shazia Nicholls) of the essential oils company Paradise, which is headed by a shady American (dubbed the ‘SHE.E.O.’).

I loved the crafty Irish nonchalance of Perry’s humour, which is impertinently playful, gleefully crackers and breezily surreal.

It’s far too long, though, at two-and-three-quarter hours. And not only are some unfinished scenes merely abandoned along the way, the eventual ending is at once too grand and too flimsy.

Jaz Woodcock-Stewart’s production renders Perry’s off-the-wall blether with nudity and strong language, spun at the pace of a long weekend in Kerry.

It’s visually intriguing, though; with off-green office carpet tiles inside an orange Formica box that transforms from bedrooms into a bowling alley and conference centre, and features a cameo from a robot vacuum cleaner.

It’s also pleasingly trashy, thanks to girl-power chart hits (including one from her namesake Katy).

She’s not the finished article, but Perry is a brilliant one-off. One of her characters reminds us that ‘meteors don’t rise’, but this young playwright from Cork might just be the exception.

On The Ropes (Park Theatre, London)

Verdict: Needs to shed some weight

Lightweight boxer Vernon Vanriel certainly has a cracking — and shocking — story to tell. This is a man who grew up in Tottenham, saw-off the religious objections of his Christian mother to his chosen sport, and fought his way to become the UK number two in his weight class in 1983…only to be shut out of a shot at the title after denouncing, the ‘white cartel running British boxing’ in the black newspaper The Voice.

Going spectacularly off the rails, Vanriel became a crack addict and was twice sectioned in hospital, before having a heart attack after being beaten by police investigating a domestic row.

Then, when he found himself homeless in Jamaica after his British passport became invalid, he narrowly avoided summary execution by the island’s police.

It took him 13 years to get back to the UK and regain his residency rights after a legal battle that ended in the High Court.

Vanriel has lived may lives in one, but this exhaustive account of his tribulations is itself an ever more exhausting two-and-three-quarter hour slog (including interval).

Dougie Blaxland’s lumbering script, written with Vanriel, actually makes him less sympathetic by being too uncritical; especially skating over his relationships with women. With so much hard luck and not enough mea culpa, it’s harder to identify with the man played by a doleful Mensah Bediako.

Where Anastasia Osei-Kuffour’s production works best is as a community event celebrating a local legend on his home turf in north London. Played as 12 rounds in a boxing ring with Ashley D. Gayle acting as MC, it’s also a semi musical performance leavened mostly with reggae music, including Oh Mama and a stirring gospel number Nobody Knows But Jesus — both sung brilliantly by supporting actor Amber James.

For all its righteous integrity, though, the show needs to drop down to two hours, tops. That might have made it a leaner, meaner fighting machine capable of delivering a knock-out punch.