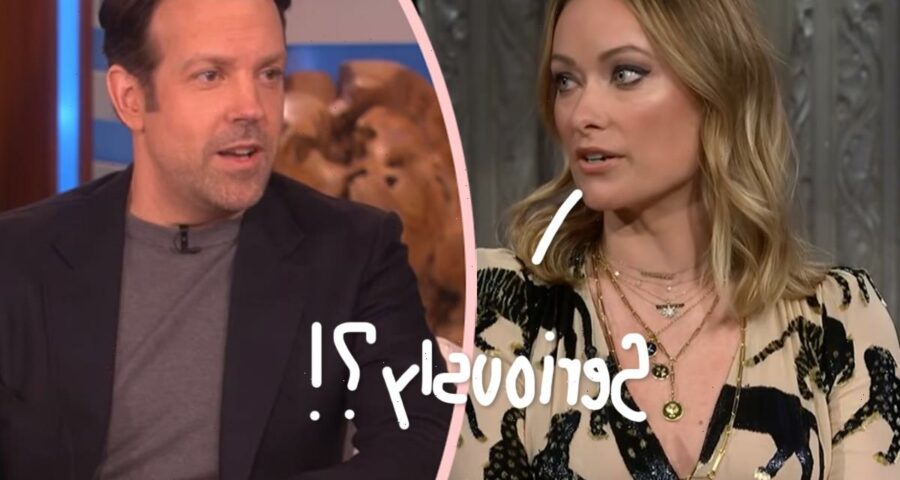 Olivia Wilde is not too happy about what went down at CinemaCon!

As you most likely know by now, when the filmmaker was presenting the first look at her upcoming film, Don’t Worry Darling, at the convention this week, she was abruptly interrupted by a process server! After being handed a manila envelope she thought was an unsolicited script or something, she was shocked to see legal papers from ex Jason Sudeikis!

Yep, right there in front of a crowd of roughly 4,000 people. It was a pretty shocking and strange moment, to say the least! And understandably, the entire situation has upset Olivia. In fact, a source spilled to Page Six on Friday that the whole thing had been pretty “mortifying” for her:

“Olivia was confused when she was handed the envelope, and she was even more confused when she opened it. It seemed unthinkable to her, and it took a moment to set in, but as mortifying as it was, she did not want to give a reaction.”

And she really didn’t! The 38-year-old actress handled it like a pro and carried on with her speech as if nothing had happened. The insider told the outlet was “determined to power through” with introducing the first look for her upcoming flick despite the awkward interaction that happened onstage:

“She was there to introduce a project that is near and dear to her heart, and for someone to try to take that moment from her — whether it be Jason, a process server or anyone else — was beyond inappropriate.”

It’s understandable this could feel like a targeted attack. After all, things are difficult enough for female directors, who never seem to be allowed the kind of leeway as their male counterparts in the industry. A public interruption of such a big moment — and involving children? It’s fuel for chauvinists just waiting to pounce, and boy does she know it.

But does she think it was intentional on Jason’s part? The source added:

“Olivia and Jason have had their ups and downs, but this was really, really low.”

That is for sure! It was a completely cruel thing to do during one of the biggest career moments in her life. But as we previously reported, sources for Dailymail.com claimed that Jason had “no idea” that the papers were going to be served in the middle of her CinemaCon and is “appalled” by what went down:

“Jason had no idea that this was happening. Nobody knew until the photos suddenly appeared. He is appalled about the whole thing and never would have wanted Olivia to be put in this kind of situation. His sole priority is their children and making sure that they are safe and happy.”

As attorney David Glass explained to People, process servers are only following “the directions of the attorney who hired him or her.” It would be highly unusual for a client to ever interact with them or make special requests of timing. Sources confirmed to Dailymail.com that the Horrible Bosses star never had contact with the woman before she served Olivia at CinemaCon. It seems likely the server just saw an opportunity and took it — and didn’t consider how it would blow back on Jason.

Thoughts on Olivia’s reaction? Do YOU think she believes Jason didn’t know?? Sound OFF in the comments!