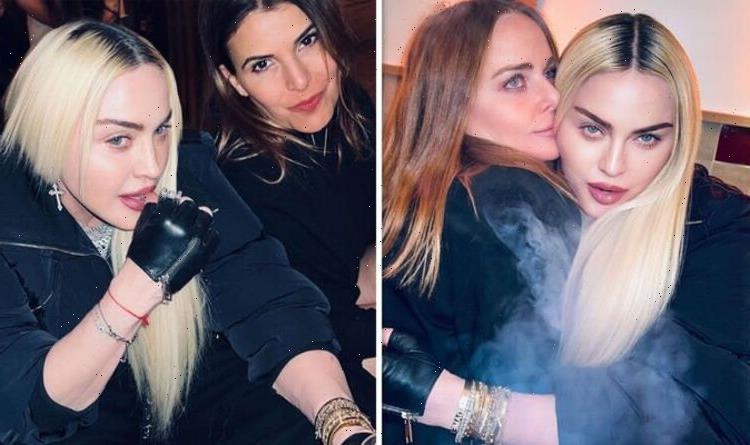 Madonna, 63, took to Instagram to share snaps of herself with fashion designer Stella McCartney, 50, actress Liv Tyler, 44, and social media star and comedian Lilly Singh, 33. The Beautiful Stranger hitmaker showed off her flawless skin as she sported a very smooth visage and flaunted her ageless appearance.

In one photo, the pop star could be seen cosying up to the vegan fashion designer as she kissed her on the cheek.

The group was joined by Madonna’s son David Banda, 16, who wore a black jumper over a white shirt.

They looked relaxed as they sat alongside each other while enjoying a drink and some food.

Madonna captioned her post: “Night out with my besties.”

_Absolutelyblessed said: “Stop messing with your face you were gorgeous naturally.”

While Ryinskott commented: “U DON’T AGE! (What’s ur secret?)”

The performer’s youthful looks were called into question earlier this year when her social media followers said she looked like a teenager.

Madonna made the most of Instagram’s filters as she shared a series of snaps enjoying a glass of wine and a vape.

The singer also shared a photo of the camera she had used.

But fans were less concerned about the star’s upcoming project and more focused on her youthful-looking appearance in the heavily filtered images.

DONT MISS:
Demi Rose causes a stir with very busty display in plunging swimsuit (PHOTOS)
Amber and Johnny’s counsellor says she ‘would strike him to keep him’ (NEWS)
Alison Hammond ‘might die sooner’ but vows to ‘have fantastic life’ (LATEST)

However, Madonna has never addressed rumours of having surgical enhancements, instead, she is currently in the process of working on a biopic of her life.

“Auditions for my film are a Surreal experience,” she wrote alongside a video of herself dancing to her hit song Burning Up.

The singer-songwriter announced last September that she is co-directing and co-writing the forthcoming film, which she has described as a “visual autobiography”.

Then in October, Madonna posted a series of snaps on the picture-sharing site, where she shared how she was nearing the end of writing, alongside one shot of her laying on the floor looking through the pages of the script.

“Grateful for the success of Madame, that my script is almost finished, and for the support of my beautiful children!

“While laying on this gorgeous Rug by Alexander McQueen!” she wrote in the caption that included the hashtag: ‘#erincressidawilson (Erin Cressida Wilson).

Wilson, an American playwright known for the films Secretary (2002) and The Girl On The Train (2016), is reportedly working on the script with Madonna, according to NME.

Diablo Cody, who won an Academy Award for Best Original Screenplay in 2007 for Juno, is also reportedly working on the project.