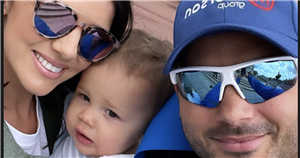 As he sets off to do 10 gruelling marathons in 10 days in aid of mental health, Ryan Thomas has been supported by his other half Lucy Mecklenburgh and son Roman.

The actor, who recently stepped out to reunite with family, began his mission in London and was waved off by his family.

He took to his Instagram to share an adorable selfie with Lucy and one year old Roman before departing.

Lucy, 29, took to her own Instagram to document the day and shared a series of pictures and videos for her followers to see.

The brunette beauty also paid tribute to her man and took the opportunity to tell him how proud she was of him.

She penned: "Good luck baby!!!!!! @ryanthomas set off today on the mammoth journey of completing 10 marathons in 10 days from London to Manchester for @calmzone.

"Me & Roman are very proud of you & all the hard work you have put into the training & preparation for this insane challenge!

"We will miss you so much & will see you at the finish line!," Lucy concluded with a black heart emoji.

Ryan's celebrity pals commented on Lucy's post and wished the dad-of-two well on his expedition.

The former Coronation Street star announced his mission in April and told his fans why he was doing it.

He began: "So the reason I set myself this challenge, I wanted to give myself a purpose, I wanted to use my platform for other people to benefit from.

"This last year more than ever, I've noticed people's mental health is suffering, so I've teamed up with Calm, the campaign against living miserable."

Ryan, who revealed how son Roman has driven him to keep going, shared a promotional clip and captioned it: "captioned the clip: "Hey guys, I've been waiting a long time to announce this news & challenge so here goes…!!

"On Monday 10th May, the first day of Mental Health Awareness Week, I will be starting a long, hard but special fundraising mission!

"I will be walking 10 marathons in 10 days from London to Manchester, raising money for mental health & suicide prevention charity @CALMZone."