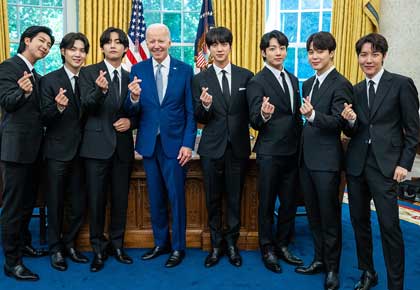 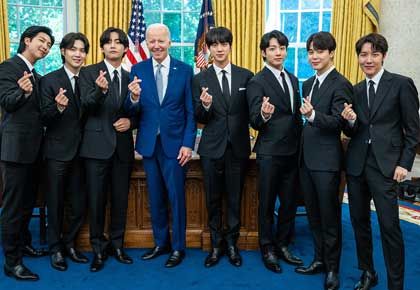 They were just a band of boys, like many other boy bands that ruled the music charts for a while.

But what makes the South Korean Grammy-nominated band, BTS, stand out is their global popularity.

And the fact that they have not hesitated to tackle social issues through their songs.

Be it mental health, the challenges the youth face when they come of age, heartbreak, loss, the importance of loving oneself and of maintaining one’s individuality — they have sung about all this and more.

The seven-member band, who visited the White House and met with US President Joe Biden on Tuesday, May 31, 2022, said they have been devastated by the recent surge of hate crimes.

‘Equality begins when we open up and embrace all of our differences,’ said Min Yoon-gi, popularly known as Suga.

Please click on the images for glimpses of BTS at the White House. 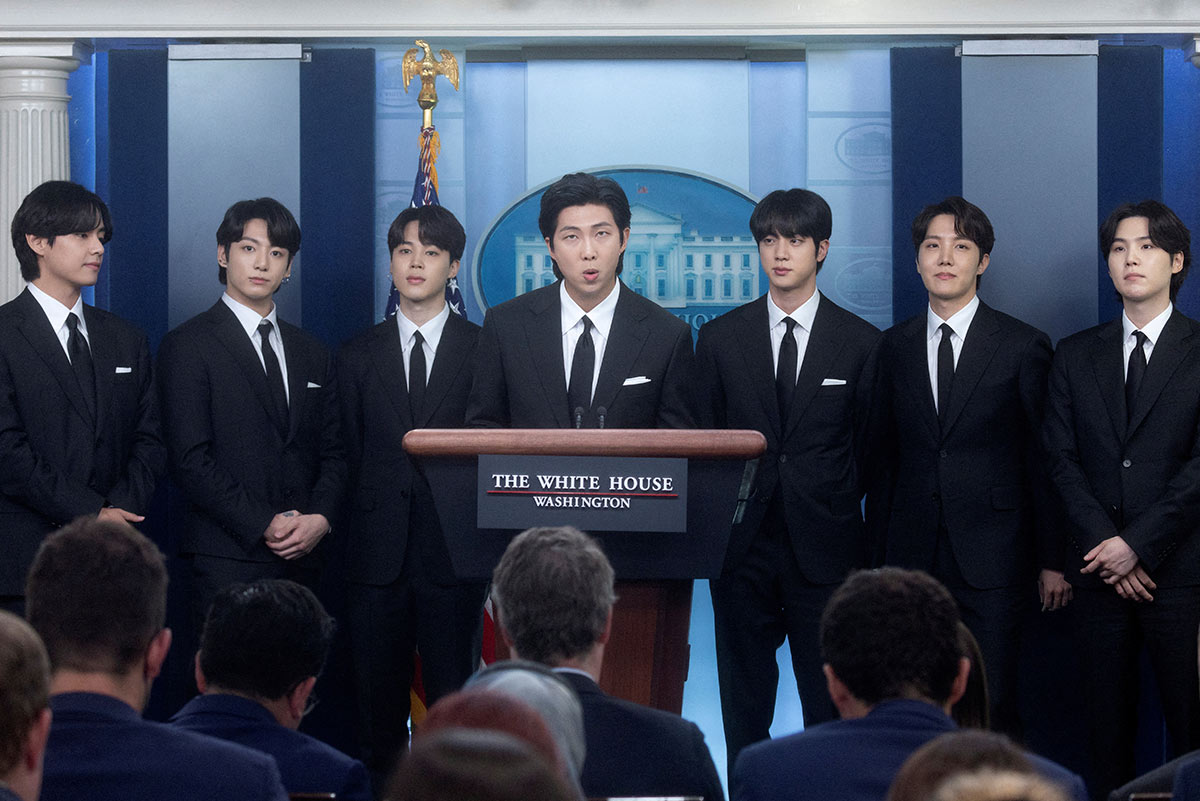 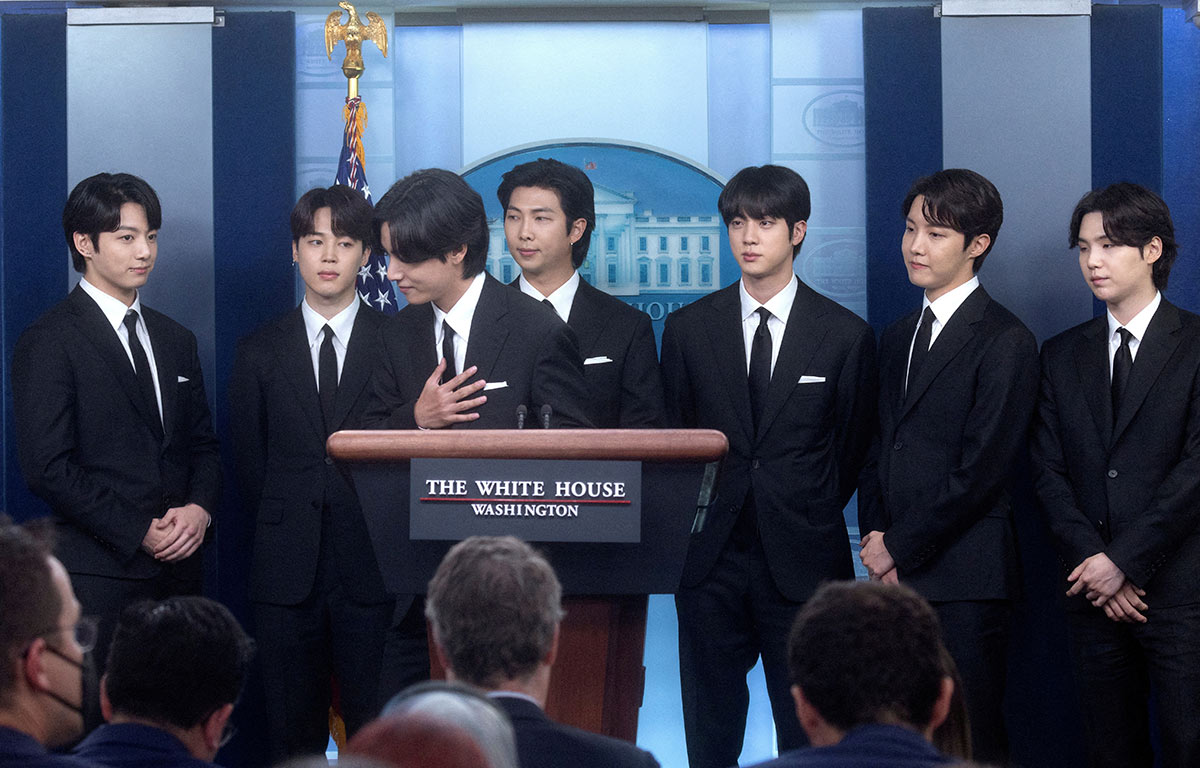 IMAGE: Kim Taehyung bows after making his statement.
‘We were devastated by the recent surge of hate crimes, including Asian-American hate crimes. To put a stop on this and support the cause, we’d like to take this opportunity to voice ourselves once again,’ his co-band member, Jimin added, reports The Hill newspaper. 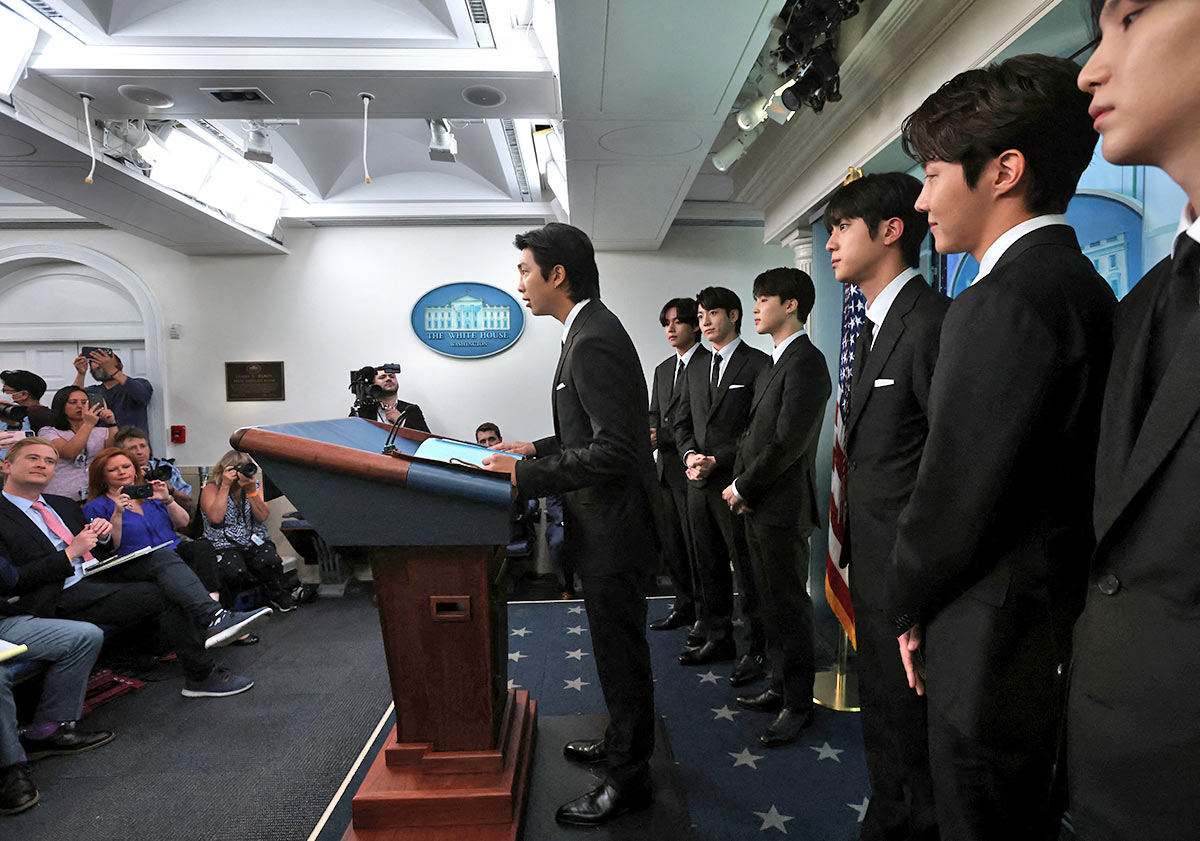 IMAGE: Expressing the group’s gratitude for this opportunity, RM (Kim Namjoon), speaking in English, said it was a ‘great honour’ to be at the White House to ‘discuss important issues of anti-Asian hates crimes, Asian inclusion and diversity.’ 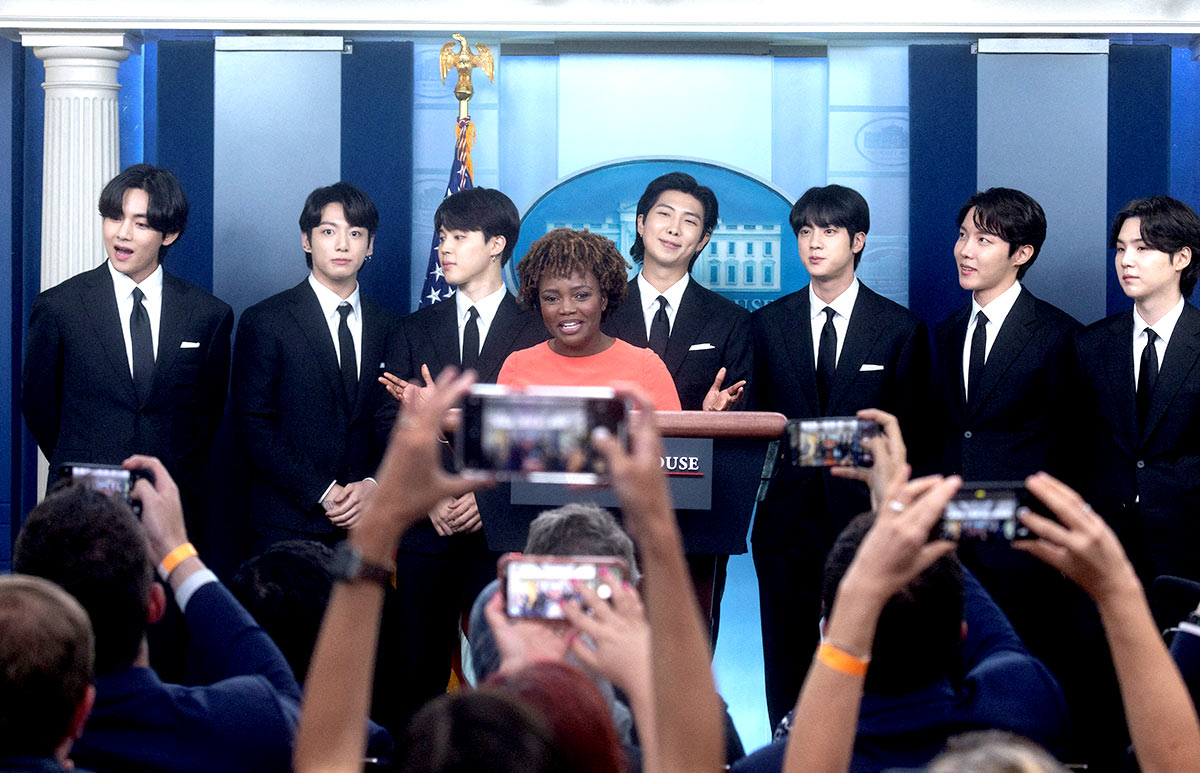 IMAGE: White House Press Secretary Karine Jean-Pierre — the first black and LGBT person to occupy that position — did not entertain any questions.
BTS, as they moved out of the press conference, apologised for their inability to take questions at the time. 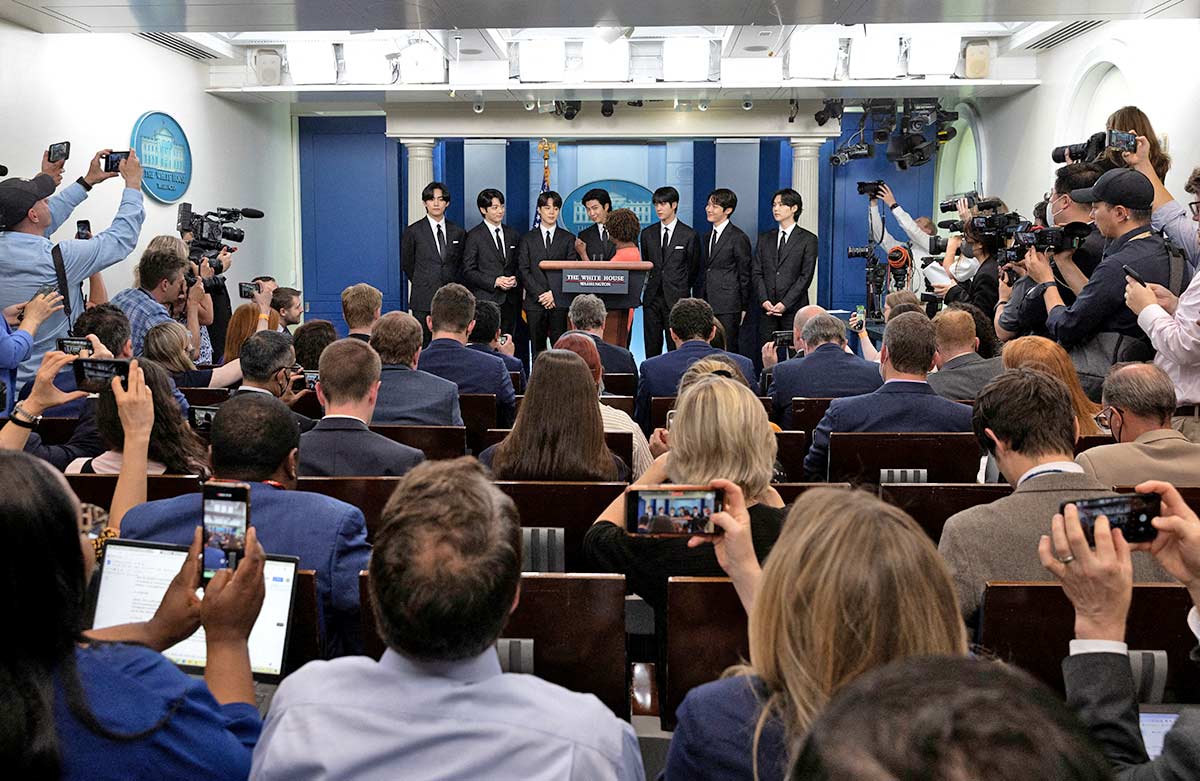 IMAGE: BTS met with President Biden following the briefing room appearance.
Biden has spoken about his commitment to combating the surge of anti-Asian hate crimes and signed into law the COVID-19 Hate Crimes Act in May 2021.
It will provide law enforcement with resources to identify, investigate, and report hate crimes and ensure that hate crimes information is more accessible to Asian American and Native Hawaiian and Pacific Islander communities.
Citing the Center for the Study of Hate and Extremism, The Hill newspaper reported that crimes against Asian Americans in the US rose by more than 300 per cent last year. 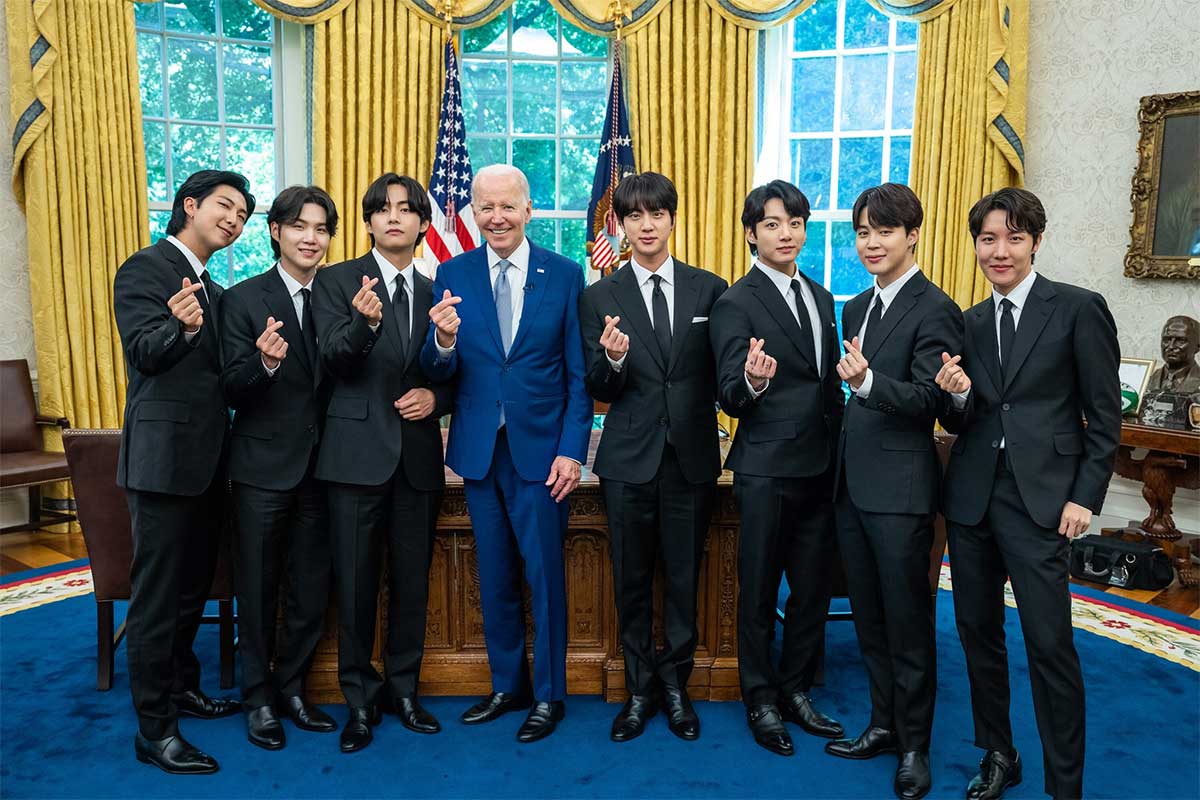 IMAGE: BTS teach Biden to make the ‘Korean finger heart’ gesture.
Love, not hate, they believe is what is needed in the world today.
Photograph: Kind courtesy BTS Official/Twitter

*With inputs from ANI.