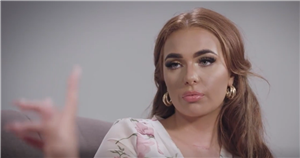 Love Island star Demi Jones has candidly discussed her thyroid cancer diagnosis and said that the scar on her neck is a "small price to pay".

Demi, 23, sat down with former co-star and friend Shaughna Phillips in an emotional video for Cancer Research's Play Your Part campaign.

Speaking about the moment she found out about her thyroid cancer diagnosis, Demi said: "I remember leaving the hospital room and I got into my car and I just sat down. I was crying so much because it had just actually hit me.

"Even though it's a treatable cancer, I still feel like, what could this do? Is this going to kill me? Am I going to be really poorly?"

Demi explained that her tumour was the "size of a golf ball", with Shaughna admitting: "I was terrified for you."

The reality star went on to discuss how some Love Island fans had spotted the lump when she took part in the 2020 series of the ITV2 dating show.

Demi said: "Quite a few people had messaged me and said that they had seen the lump on my neck. My doctor said that he reckons it was there for years and years just slowly growing."

The reality star went on to discuss her upcoming treatment over the next few weeks, saying that she will be getting radiation treatment to "zap away any of the remaining cancer cells".

Demi said that the scar on her neck is a "small price to pay for still being here".

She emotionally added: "I feel like so many people would probably love to be in my position right now, so I'm just thinking myself really lucky."

Demi has bravely documented her journey since her thyroid cancer diagnosis in May and she said that her 1.2million followers have been getting lumps checked because of her.

She said: "Now, I can't go a day without people messaging me, saying they’ve got their lumps checked because of me, they’re going for an operation because of my story."

Become an OK! VIP and get all of our exclusive interviews, videos and stunning photo shoots sent straight to your inbox every week!

You'll receive an email with stories exclusive only for OK! VIP members, including celebrity house tours, baby reveals, wedding snaps and so much more!

"One in two people will have cancer in their lifetime. Near enough every person that you know will have a story to tell about cancer, so why don't we speak about it more?"

For the latest news on your favourite islanders, sign up to OK!'s daily newsletter.