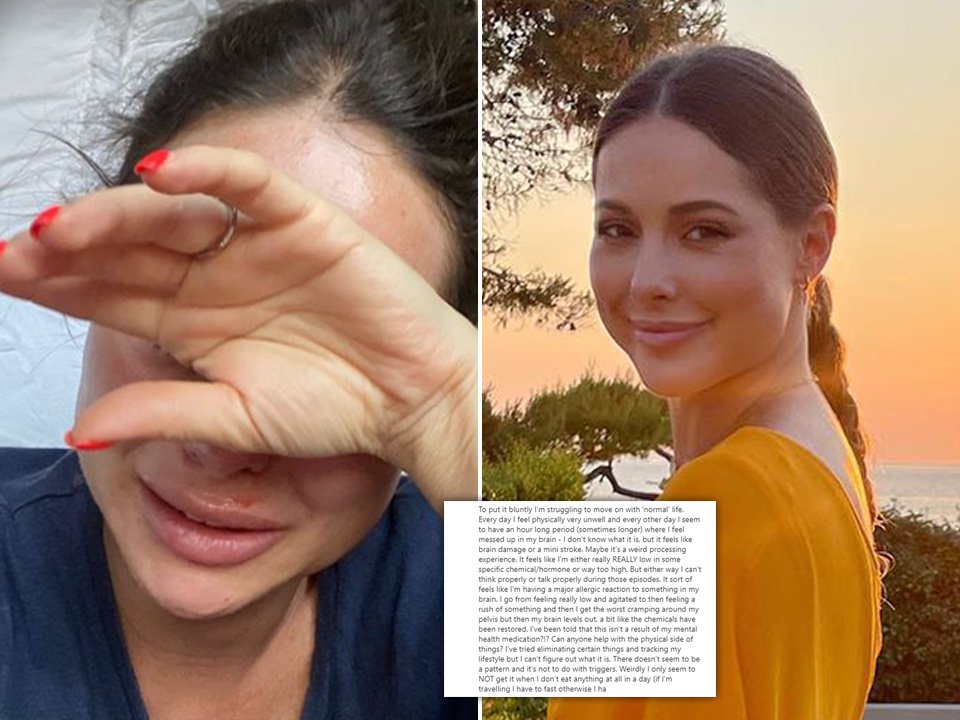 Made in Chelsea star Louise Thompson has admitted she’s worried about her significant memory loss after her breakdown and daily battle with PTSD and post-natal anxiety.

In a long and heartfelt Instagram post, the reality star revealed that her mental health struggles have come close to ‘destroying her family.’

The 32-year-old has been struggling with PTSD since the traumatic birth of her first child, Leo Hunter, where she almost died and spent five weeks in intensive care.

Seven months after giving birth to her son with Ryan Libbey, 31, Louise says it feels like her brain has ‘erased’ so much of her life, while it still ‘blocks out’ all memory of Leo’s birth.

Louise posted a series of holiday photos of her in a floaty orange dress, along with a substantial caption that began: ‘Mmmmm. I’m at a weird stage now where I’m blocking everything out. Maybe I said that way back at the beginning?

‘I can’t actually remember much because I’m still trying to protect myself from the pain. I don’t want to re-read. This condition feels very repetitive. Finally it DOES feel like everything happened a long time ago but it also feels like it happened to someone else and not me.

‘I kind of feel like I’ve erased my entire past and started life as a totally new person. A sometimes sick person. People tell me how far I’ve come, but I can’t remember how far.

‘I can remember a weird amount of things from my childhood… sensory things will remind me of the strangest memories from way back when I was 5-15, but then I’ve sort of erased everything between then and now.

‘Now that I mention it, sometimes ALL I can feel is sensory stuff, like the feeling I get when I go from a hot room to a cold room and it helps me connect to the world around me.’

The TV star admitted it has been difficult to readjust to ‘normal life’ as it feels like her brain is somehow ‘damaged’ from the event.

‘To put it bluntly I’m struggling to move on with ‘normal’ life,’ she continued. Every day I feel physically very unwell and every other day I seem to have an hour long period (sometimes longer) where I feel messed up in my brain – I don’t know what it is, but it feels like brain damage or a mini stroke.

‘Maybe it’s a weird processing experience. It feels like I’m either really REALLY low in some specific chemical/hormone or way too high. But either way I can’t think properly or talk properly during those episodes.

‘It sort of feels like I’m having a major allergic reaction to something in my brain. I go from feeling really low and agitated to then feeling a rush of something and then I get the worst cramping around my pelvis but then my brain levels out, a bit like the chemicals have been restored…

‘I’ve tried eliminating certain things and tracking my lifestyle but I can’t figure out what it is. There doesn’t seem to be a pattern and it’s not to do with triggers. Weirdly I only seem to NOT get it when I don’t eat anything at all in a day (if I’m travelling I have to fast otherwise I have to fast because otherwise I have major gut issues).

She describes being in a cycle of feeling like she’s ‘turning a corner’ and feeling like herself again, before becoming very ill.

‘My mind has been EVERYWHERE and now I just want someone to fix me,’ she pleaded.

‘I know that I want to go back to being normal Louise so why won’t my body and brain just let me. As someone that is still trying to shift the label of ‘control freak’ this has been really hard to manage because I’m constantly seeking answers and am not getting very far. I don’t think anyone I speak to can relate.

‘Just when I think I might be turning a corner I find myself feeling really ill. That puts me right back in a bad place. Then I question: Will I ever feel healthy again? And more importantly will I ever be able to think like a normal person again?’

Louise went on to say she ‘dreads her life’ and is frustrated that she doesn’t ‘feel good’ all the time.

‘It’s getting really boring not being able to do the things I love, even with a bit of Leo help. I kind of dread my life, but then sometimes it’s manageable,’ she revealed.

‘Sometimes I even have a really good time, but then when I’m in a bad place I can’t understand how I can have a good time at all. I just have to repeat this too shall pass. Sadly I can’t just pull myself out of the funk with happy thoughts or ”feel good” practises…

‘I can’t even believe I’m still banging on about it myself. There aren’t really words that take you there. Let’s just say I wouldn’t wish it upon my WORST enemy, not that I have any enemies.

She added: ‘It feels very unfair. I think I have only just started to reach the anger stage too which is a bit strange for a typically unangry person.

‘I’m really angry that things got so bad and that I had to go through all of this. It makes me sick. It has come v close to destroying my family and my relationship and I’m angry because of that. I’m also irrationally angry at strange things.’

The mother of one also shares her concerns about her fiancée Ryan as she believes he is suffering from PTSD too.

In a recent post on social media, Ryan disclosed that he was ‘holding on by a thread’ as Louise was rushed back to hospital for ‘alarming blood results.’

He wrote: ‘Just as I thought I was approaching a time period where I could focus some energy into my own therapy and healing, Louise unfortunately still struggles with various things every single day and some of those symptoms are worsening.

‘We’re now back at the hospital (this time private as we’ve been so let down by the NHS) because Louise has received some alarming blood test results.

‘At this moment I don’t know how serious this is, but it feels devastating to be sat outside a hospital waiting room, seven months on from Louise giving birth.

Ryan added: ‘I’m holding on by a thread, trying to work, keep business alive, earn money to support Louise and Leo, trying to keep up with my own ambitions (and failing).

Post-traumatic stress disorder is, according to the NHS, a condition where the sufferer ‘often relives the traumatic event through nightmares and flashbacks, and may experience feelings of isolation, irritability and guilt.

‘They may also have problems sleeping, such as insomnia, and find concentrating difficult.

‘These symptoms are often severe and persistent enough to have a significant impact on the person’s day-to-day life.’

Louise has begged for ‘someone to fix her’ but also doesn’t want to be ‘labelled as mentally unwell.’

‘When I spoke to my psychiatrist she told me to make sure that any physical health doctors I see take my concerns seriously,’ she wrote. ‘I don’t want to just be labelled as ‘mentally unwell’ – I feel that I’m often overlooked.’

She detailed: ‘Pre my traumatic experience and spending all that time in hospital I was super healthy working out 4 times a week and living a good life. Now I can hardly climb a flight of stairs without feeling exhausted. I get the most agonising pain too. I just want someone to fix me.’