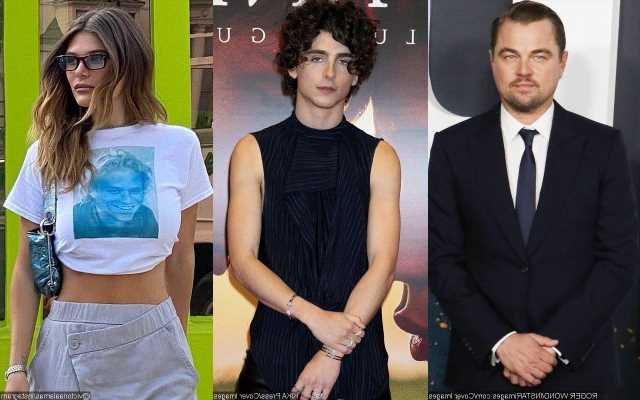 One day earlier, the ‘Titanic’ actor was photographed enjoying a night out at Los Angeles’ hottest private club Bird Streets Club with the 23-year-old actress amid rumors he’s in a relationship with Gigi Hadid.

AceShowbiz –Leonardo DiCaprio has apparently found his new favorite hangout spot. The “Titanic” actor went back to the same hotspot where he had a dinner date with Victoria Lamas, but this time he brought Timothee Chalamet.

On Wednesday night, December 21, the 48-year-old actor was photographed enjoying dinner with his “Don’t Look Up” co-star at Los Angeles’ hottest private club Bird Streets Club. In photos surfacing online, the duo were also seen hopping in the same car, with the Oscar-winning actor behind the wheel and the “Dune” star in the passenger seat.

Leo and Timothee kept a low profile in an all black outfit. The pair also had a baseball cap and face mask. According to Page Six, they headed up to the club’s roof to join a larger group of friends.

The actors’ sighting came only a day after Leo and Victoria were spotted leaving the hotspot separately but later getting into the same car. During the night, they seemed to be enjoying each other’s company as Leo was seen laughing alongside the 23-year-old brunette beauty while leaving the eatery.

Despite the paparazzi photos, a source confirmed that Leo, who has been reportedly romancing supermodel Gigi Hadid for a few months, is not romantically linked to Victoria. The insider told Page Six, “[They] are not dating.” The informant further explained, “Both were seated (not next to each other) at a big group dinner. They were also joined by a number of other people in the car.”

Leo and Gigi were last spotted together late last month. At the time, the so-called couple was caught separately heading out of celeb hotspot, Cipriani. An eyewitness claimed that they “left within minutes of each other” with the model exiting first, followed by “The Wolf of Wall Street” actor and his friend Vivi Nevo.

Leo and Gigi reportedly started dating after Leo broke up with his girlfriend of five years Camila Morrone in August. The two were first seen together in September. According to a report, they attended an event at Casa Cipriani during New York Fashion Week where they were snapped leaning in close to each other as they tried to chat in the midst of the busy party.

While they’re seemingly enjoying things between them, it’s reported that Gigi and Leo are “taking it slow” and not referring to themselves as an “exclusive” couple. It’s also said that Gigi is not ready to introduce Leo to her daughter Khai, whom she shares with ex Zayn Malik.