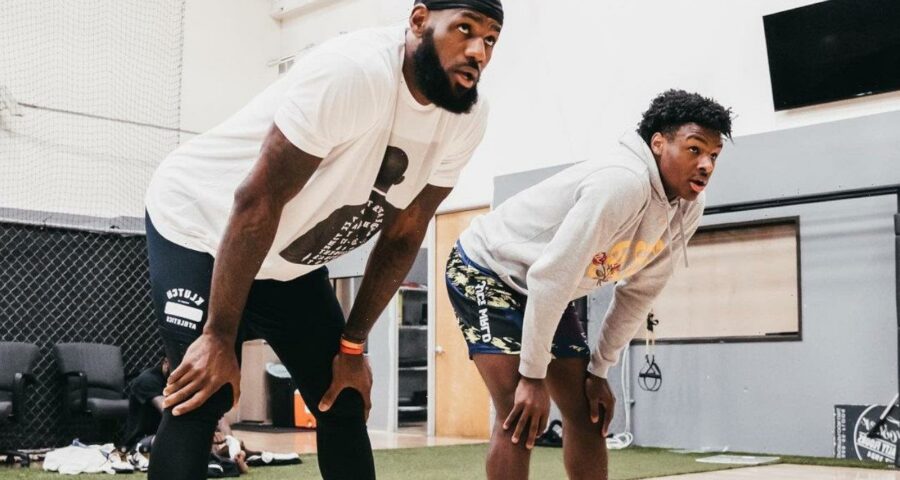 During the final minutes of his son Bronny’s prep basketball game which took place at LeBron’s alma mater, the Los Angeles Lakers icon calls out a PA announcer over a comment made about his son.

AceShowbiz –LeBron James is a supportive dad as he attended his son Bronny’s prep basketball game on Saturday, July 3. However, things went south when the four-time NBA MVP caused a scene at the game which took place at LeBron’s alma mater St. Vincent-St. Mary’s High School.

During the final minutes of the game, LeBron called out a PA announcer over a comment made about his son. It was reported that the announcer said Bronny got a foul call because he was playing in the gym with his father’s name on it.

The Los Angeles Lakers left his and approached the announcer. He could be seen yelling at the announcer, prompting the game to be stopped for a moment. Several police officers also and the referees made their way over to LeBron as they were afraid that things might get escalated. Thankfully, the athlete headed back to his seat after he calmed down.

Back to the game, Bronny’s Strive for Greatness team lost the game in overtime, 73-69. The game game was a part of the “Battle Summer Showcase”, which is a tournament highlighting some of the best high school talent in the Midwest.

Upon learning LeBron’s act, some Internet users defended the NBA star. “Why do lebron have to sit down and be quiet when the announcer not only mentioned him but claimed nepotism,” an Instagram user wrote. “One thing about Lebron. He don’t play about his family! He said what he said,” another person echoed.

“There are plenty of regular parents who are up and loud during their child’s sporting events. Add to that some of these same regular parents know the refs too. Lebron had a right to defend his child. The comment was unnecessary by the announcer,” another fan added. Further criticizing the announcer, one user wrote, “The announcer was dead a** wrong and unprofessional. Just call the game sir.”