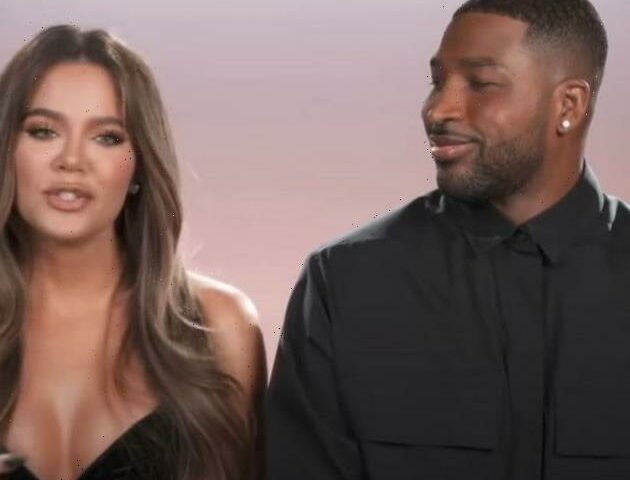 But for reasons we can’t qute explain, her anger is not directed at Tristan Thompson.

Tristan is the one who keeps cheating on Khloe, who keeps complicating her relationship with her fans, and undermining her self-esteem.

Despite all of that, however, he always seems to keep getting second chances.

Khloe’s not okay with Tristan’s cheating, mind you.

It’s not like they have some open relationship arrangement going on.

We know this, because every time Tristan gets caught cheating, Khloe fumes with frustration — but for some reason, it’s always directed at her fans and the media.

She went on another rant this weekend, this time accusing the public of making up false natrratives about Tristan and his actions.

“HA! some of y’all really just make up anything and swear it’s the truth as if you know what’s going on,” she wrote.

“So you create a narrative that fits what you choose to believe.”

When a fan replied “misery loves company,” Khloe shot back with some next-level vitriol in which she accused the press and her followers of terrorizing her!

“It is so old at this point. It’s always something about people creating fake s–t about me and actually terrorizing me about something THEY ARE CREATING,” she tweeted.

“Without anyone knowing any facts. It’s some weirdo sh-t.”

Khloe didn’t offer any specifics, and while she never mentioned anyone by name, it seems clear that the target of her wrath was the public in general.

One fan suggesred that Khloe is simply too nice, and this is the sort of thing that happens when you allow people to “step all over you,”

“Because they give so many other people a different type of grace and understanding. I get critiqued and judged for any f—ing thing.”

From there Khloe proposed a solution to the problem of her just being too damn nice:

“I guess I got to start snapping a little more,” she wrote.

Needless to say, Khloe is all worked up about something here.

She declined to go into detail, but her issue is in some way related to social media:

“Such a smart move!!!!” Khloe replied when a fan suggested that she delete the Twitter app for the sake of her mental health.

“This is just so unhealthy at times. It’s outrageous how people feel they have the right to spread such trash and lies about other people. They do it so many people and it’s terrible.”

When another follower stated — somewhat ironically — that they’ve been trying to steer clear of social media entirely, Khloe had this to say:

“Same!! Been on this vibe recently. My mental health needs it.”

She concluded her rant on a relatively positive note, writing, “I love you! (some of you).”

Now, unless she specifically states otherwise, anytime Khloe is upset, we assume it has something to do with Tristan.

This time, her beef was with Twitter, but we’re guessing it had something to do with someone spreading info about Tristan.

Quitting Twitter altogether might be a good thing for Khloe right now, but quitting Tristan would be even better.